Today I got to teach in church. I always love preparing to teach, because in the process of studying for the lesson or talk... I learn sooo much!
I felt like this was a tough lesson, because there was sooo much to it and so I tried to come up in a way to make it something that everyone could understand and something that applied to their lives.

I started out with some of these quotes by Ezra Taft Benson, he was the United States Secretary of Agriculture and he was a prophet of God. Those who knew him said that he was a very humble man and did not allow the applause of the world or the harsh criticism ring in his ears. Instead, he was true to a reminder he frequently received from his wife, Flora: " Don't worry about the world's opinion of you as long as you're right with the Lord. "

"Pride does not look up to God and care about what is right. It looks sideways to man and argues who is right...

"Pride is characterized by "What do I want out of life? rather than by 'What would God have me do with my life? ' It is self-will as opposed to God's will. It is the fear of man over the fear of God.

" Humility responds to God's will- to the fear of His judgements and to the needs of those around us. To the proud, the applause of the world rings in their ears; to the humble, the applause of heaven warms their hearts. "

In the scriptures we read over and over about the warning of Pride.
Pride is a very misunderstood sin, and many are sinning in ignorance. The lesson goes on to say that most of us think of pride as self-centeredness, conceit, boastfulness, arragance, or haughtiness. All of these are elements of the sin,, but the heart, or core, is still missing.
Pride is competitive in nature. The proud cannot accept the authority of God giving direction to their lives. They pit their perceptions of truth against God's great knowledge, their abilities versus God's priesthood power, their accomplishments against His might works. Many times the proud... wish God would agree with them. They aren't interested in changing their opinions to agree with God's.

The proud make every man their adversary by pitting their intellects, opinions, works, wealth, talents, or any other worldly measuring device against others. In the words of C. S. Lewis: " Pride gets no pleasure out of having something, only out of having more of it than the next man...It is the comparison that makes you proud: the pleasure of being above the rest. Once the element of competition has gone, pride has gone."

I also compared Pride like an Octopus... I am always trying to think of visual ways to teach my lessons ( guess you can tell that I am used to teaching kids ). When I studied up on the Octopus, I thouht how fitting. Here is what I found when studying how an Octopus captures its prey.
- First of all they are very intelligent
-Then do not have an external or internal skeleton, therefore they can squeeze in small places to hide and protect themselves from their predators.
-They use their many armms to catch and ensnare their prey.
-They can spray ink out of their bodies, clouding the waters so that they either attack their prey or to get away from danger.
-They are fast.
-They have poisionus saliva and with one bite, can seriously injure or kill their prey
- They can camouflage themselves, so that they can sneak up on their prey or hide from their predators. 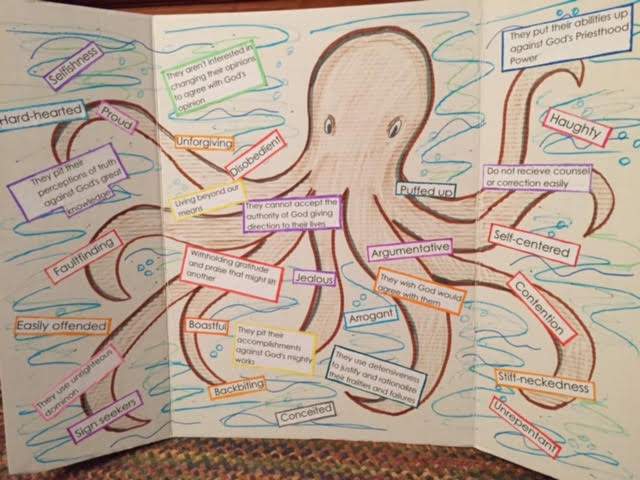 I thought Pride is a lot like an Octopus, many times people with knowledge and wealth often forget about being humble and teachable. As you look at this Octopus and all the things that are considered prideful by the Lord, then you can also see that like the ink that the Octopus sprays to cloud the waters, the world tries to cloud the issues or the facts so as to ensnare us to have less choices. The world tries to make it seem as if the Commandments are optional!  Or we have to do it just because everyone else is... Like his poisonous saliva, there are many prideful things out in the world that are poisonious to our souls, if we let them take ahold of our lives and our families. And like the octopus can camouflage itself, so can bad things of the world, try to disguise it's self as something good. And last but not least, like the many arms of the octopus that can catch and ensare their prey. There are many things out there that tempt us to be prideful in. Things that can harm us physically, emotionally and spiritually!

I also shared this poem, it was a great way to remind us that we are all human, and do sometimes make mistakes and make judgements about others.

The Cookie Thief A woman was waiting at the airport one night,
With several long hours before her flight.
She hunted for a book in the airport shop,
Bought a bag of cookies and found a place to drop.
She was engrossed in her book, but happened to see,
That the man beside her, as bold as could be,
Grabbed a cookie or two from the bag between,
Which she tried to ignore to avoid a scene.
She read, munched cookie, and watched the clock,
As the gutsy “cookie thief” diminished her stock.
She was getting more irritated as the minutes ticked by,
Thinking, “If I wasn’t so nice, I’d blacken his eye!”
With each cookie she took, he took one too.
When only one was left, she wondered what he’d do.
With a smile on his face and a nervous laugh,
He took the last cookie and broke it in half.
He offered her half, and he ate the other.
She snatched it from him and thought, “Oh brother,
This guy has some nerve, and he’s also so rude,
Why, he didn’t even show any gratitude!”
She had never known when she had been so galled,
And sighed with relief when her flight was called.
She gathered her belongings and headed for the gate,
Refusing to look at the “thieving ingrate”.
She boarded the plane and sank in her seat,
Then sought her book, which was almost complete.
As she reached in her baggage, she gasped with surprise.
There were her bag of cookies in front of her eyes!
“If mine are here,” she moaned with despair,
“Then the others were his and he tried to share!”
Too late to apologize, she realized with grief,
That she was the rude one, the ingrate, the thief!!!

Then near the end we talked about the Antidote for Pride ...which is HUMILITY!
If we are humble, meek, submissive and come to the Lord with a broken heart and a contrite spirit then we will be more teachable. Rudyard Kipling put it well:
The tumult  and the shouting dies;
The captains and the kings depart.
Still stands thine ancient sacrifice,
An humble and contrite heart.
Lord God of Hosts, be with us yet,
Lest we forget, lest we forget....

We can choose to be humble, obedient, forgiving, serve others and obeying God!

There was a ton more about my lesson and if you want you can read the rest of it HERE:
Hope you all had a wonderful Sabbath.
Good Night dear friends!
Posted by Lynn at 11:58 PM