It was a great Sabbath Day! But it is the day that I miss my kids and grandkids the most. Sundays were always our family days along with Monday Nights. Now they are all grown up and so I tried to make sure that I fill my days with good things and of course Jeff and I are grateful for the time we have together.
Tonight we went out and saw the rare Total Lunar Eclipse or Blood Moon tonight. 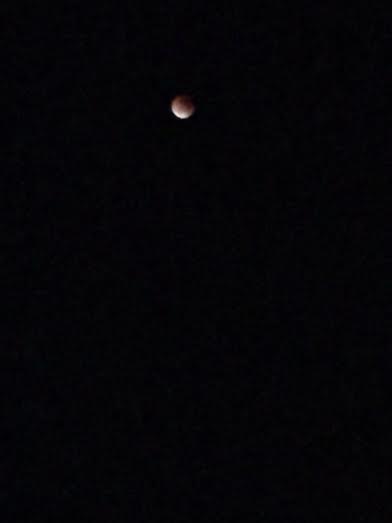 On Sunday nights Jeff and I like to watch Turning Point you can watch it HERE
It is small short TV programs about people who have made such a great difference in life. They share their talents and passion with helping others. It is interesting to see why they got to this point in their lives and it shows the huge healing process these people go through! I love that there are so many people out there that put all there energies in making a huge difference in the world! Love it!


Pastor and former prostitute help each other be better

890CONNECT 46TWEETLINKEDIN 2COMMENTEMAILMORE
She remembered the pastor's bare feet above all else.
Anika Rogers arrived at the Magdalene recovery community when she finished her jail time on her 87th arrest. After being repeatedly sexually assaulted, after nearly being killed in an alley, after being homeless and hopeless, Rogers was ready for something different.
The Rev. Becca Stevens, Magdalene's founder, was there to meet Rogers when she arrived. And Rogers was dumbfounded.
"I think I was expecting somebody with a tight collar telling you what you should and shouldn't do," she said. "I remember the bare feet.
"She hugged me and she said, 'Welcome.' She was very humble. No show, no nothing. It was awesome. I felt love."

Buy Photo
Magdalene resident and Thistle Farms packing manager Anika Rogers laughs with Rev. Becca Stevens as Stevens signs her books for orders. Stevens is founder of Thistle Farms-Magdalene. (Photo: Shelley Mays/The Tennessean)
Stevens, 51, an Episcopal priest, has been showing love to thousands of women through Magdalene since the program started in 1997. She also has created jobs for those women by starting two not-for-profit businesses, Thistle Farms, which ships lotions and candles around the country, and Thistle Stop Café, serving up herbal teas and sandwiches in West Nashville.
For those efforts and countless others, Stevens will receive the lifetime humanitarian award at the T.J. Martell Foundation Honors Gala on March 30.
Stevens insists that the women she helps — like Rogers — actually help her more than she helps them.
"I will always be indebted to Anika," she said.
Rogers first remembers being sexually abused in her hometown of Detroit when she was 4, though she wouldn't know it was wrong until several years later.
Her mother was a drug addict and her father disappeared early. Rogers ended up in seven foster homes in four years — and she was molested in each one.
"I was feeling scared and alone," she said. "I did what I was told to do."
Rogers finally got adopted when she was 8, and her new family moved her to Nashville. Soon thereafter, her adoptive mother moved two male relatives into the home, and Rogers said they molested her, too.
The girl started lashing out, getting in fights in school, and that landed her in special education classes in a Tusculum area middle school. There, Rogers finally learned about sexual assault and found out it was wrong. But she wasn't angry.
"It was a relief," Rogers said. "I grew up feeling like something was wrong with me because it happened all the time."
Still, Rogers continued to be abused, and she eventually struck out on her own on the streets, often trading sex for money, food, shelter — and eventually crack cocaine.
When she was high, "all the pain and sadness I was feeling went away," Rogers said.
The 2004 attack in the East Nashville alley happened while Rogers was carrying drugs for a dealer. Multiple stabbings left her unable to walk or talk for several days. But the attack didn't stop her from turning tricks or selling drugs.
"I hustled from the ICU back to the streets."

Buy Photo
Magdalene resident Anika Rogers,right, shows her facial scars from a knife attack that happened in an alley in Nashville. (Photo: Shelley Mays/The Tennessean)
Eventually she finally surrendered: "I got sick and tired of being sick and tired."
In jail after her 87th arrest, Rogers went to a counselor in Metro Jail to ask for help. That's when Rogers found out about the Magdalene project.
Pastor Stevens is glad Rogers did. Abused and beaten, Rogers arrived at Magdalene with a smile on her face.
"There's so much light and life in her," Stevens said. "It's easy to be friends with Anika."
After therapy, parenting classes, computer classes, recovery meetings, Rogers started to work at Thistle Farms. That's where she discovered she was a pretty good salesperson.
After a few months, Stevens discovered Rogers also was good at telling her story and telling the story of Magdalene. So Stevens took Rogers on a trip to Jackson Hole, Wyo., to push Thistle Farms and its products.
It was Rogers' first airplane ride.
"I felt so close to God up in the sky," she said. "It's how I grasped the idea of my higher power. When you're way up in the sky, everything looks perfect down there. That's when I realized that's how God looks at me. Perfect."
In January, Stevens took Rogers to the beach for the first time after a trip to promote Thistle Farms in Jacksonville, Fla.
"The very first thing Anika did was bend down and start picking up seashells," Stevens said.
"You can beat Anika, you can jail her, you can call her an orphan, you can do whatever you want. You can go through all that and still, the wonder of the beach makes her bend down and pick up seashells," Stevens said.
"It reminds me that I'm still loved and I've got wonder in me," the pastor said. "That's a big gift."

Buy Photo
Rogers packs Thistle Farms products to be shipped to a customers. (Photo: Shelley Mays/The Tennessean)
Reach
Brad Schmitt
at 615-259-8384 and on Twitter
@bradschmitt
.
Thistle Farms and Magdalene help women
Magdalene
What: Two-year recovery program for women coming out of prostitution, trafficking and addiction. Residents receive free housing, food, medical care, therapy, education job training and other services.
Who: 36 women are enrolled in the program, with 80-100 on a waiting list.
Website:http://www.thistlefarms.org/index.php/about-magdalene
Thistle Farms
What: An umbrella of not-for-profit businesses — including a bath and body care company and the Thistle Stop Cafe (5128 Charlotte Ave.) — created in 2001 to provide jobs for the women in the Magdalene program.
Who: 40 Magdalene residents and graduates work there.
Annual gross sales: About $1.5 million.
Website:http://www.thistlefarms.org/
The Rev. Becca Stevens gets lifetime award
The Rev. Becca Stevens will receive the Lifetime Humanitarian Award from the T.J. Martell Foundation, which battles life-threatening illnesses.
Watch it here:
Posted by Lynn at 10:53 PM