I know this isn't necessarily an inspirational story, but I do have to say that I agree with Jason on this topic of social media. My concern is when people put things on there like he said about their spouses or children that would upset them or embarrass them. I also wonder why people put photos on their of them selves dressed immodestly, who are you wanting to see that? And if the answer is ...the whole world, then the next question would be ....why?
I wonder what kids think about their parents putting  photos on social media that are provocative? I like this article ...because it makes one stop and think... maybe before they click the mouse again!
Good night dear friends!

Your Facebook friends don’t care what you had for breakfast It’s hard to imagine just 10 years ago we lived in a tragic world where no one knew what their friends had for breakfast.
How did we ever survive the workday without knowing that our long-lost pal from high school — the one we haven’t been in the same room with in 25 years — had a delicious Sausage McMuffin with Egg with two hash browns and a small OJ on the way to the office?
Thankfully it’s not just the breakfast lineup we’re entitled to.
My Facebook is filled with pictures and descriptions of midmorning snacks, the lunch buffet special and the homemade ravioli that’s “so totally legit.”
It’s no wonder they call it a Facebook feed.
There are also the people who can’t wait to tell us precisely what they ordered from a restaurant and how difficult it was choosing between the stuffed eggplant and the asparagus soup.
“It was soooo tough, but I went with the eggplant! LOL!”
Thanks for sharing. I was worried I wouldn’t fall asleep until I knew.
It’s not just food, though, is it?
Sometimes, we use social media to share information that is trivial at best and wildly inappropriate at worst.
One of my Facebook friends will frequently post details of arguments with her husband. They usually begin with something like this: “If Johnny (no, his name isn’t Johnny) does this annoying thing one more time … ” and ends with a rhetorical question on why she ever married him. A day or two later, they will make up and of course she will want Facebook to know.
This person has several hundred friends on Facebook. I’ve often wanted to ask her if she would consider gathering all of them in a giant auditorium, standing onstage with the mic and announcing, “I cannot believe my husband left the toilet seat up again! If it happens one more time, I am throwing all of his stuff in the front yard and lighting it on fire.”
Before she turned off the mic, she might add, “FYI, my chinchilla has a cold. Frowny face.”
Why are we so willing to share things on social media in front of such large audiences that we would never share in person at the front of a crowded room?
Clearly, social media has benefits and can be a blessing. Like you and millions of others, I’ve been able to reconnect with old friends and make many new ones online. I enjoy sharing pictures of my kids and keeping up on friends and family scattered far and wide.
Obviously, every post doesn’t need to announce seminal moments like babies, birthdays or baptisms. Sometimes, I don’t mind a more trivial slice of life. But we certainly don’t need enough slices for a whole loaf. And while some sharing is certainly appropriate in moderation, other items should always be off-limits.
Bashing your spouse? Off-limits. Posting pictures that could cause you to lose the job you have or prevent you from getting the job you want? Always a bad idea. Pictures of your cat wearing a sweater and a fake mustache? Super inappropriate.
Perhaps before any of us post something online, we should step away from the mouse and ask ourselves a few questions: “Will this embarrass me? Will this embarrass someone else? Is it something that I would comfortably say in front of my spouse? Children? Employer? Is this something my friends will genuinely be interested in?”
Yes, your friends want to see how big your kids are getting.
Yes, your friends are interested in seeing the gorgeous deck you saved a fortune on by building yourself.
Yes, your friends are probably even interested in your favorite Bible verse or inspirational quote.
But no, your Facebook friends don’t care what you had for breakfast.
I read the article HERE: 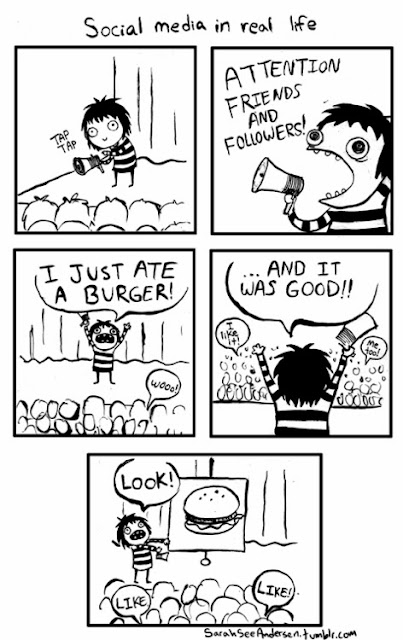