Happy Halloween from the Woodard's in Salem, Mass
After the Hurricane and the side effects, today finally turned out to be a pretty nice day after all.
Krystal wanted us to watch the Movie Hocus Pocus by Disney, it was filmed in Salem, Mass which is where all the history is about witches and Halloween. It was fun to be there today and see where the movie was filmed.

We all dressed up ( it was mandatory said Krystal :) Our little Kai was the cutest little Monster in Salem. Brad and Krystal were Mr and Mrs. Sugar Skulls ( Day of the Dead Couple ) I thought we were really dressed up, until we saw all the other people dressed up. There was a ton of people there and some really elaborate costumes. We had asked about going to Salem last week and we had heard you need to go early in the day before people get drunk and out of hand. I guess it really gets wild near the evening. There were tons of police officers so I am assuming what they said was true. So we left around 5:30 or so. 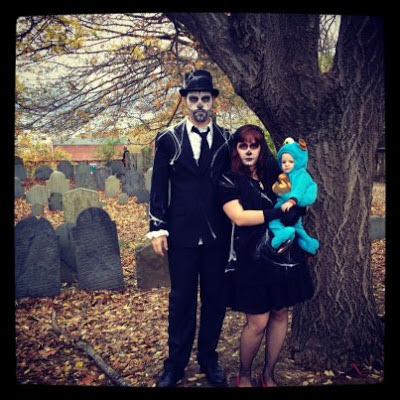 Jeff and I were whatever we could find in their Halloween decorations box. Jeff ended up being Jethro a cute Truck Driver which I couldn't resist hanging out with. Of course I guess that is common with Cow Girls like me! :) 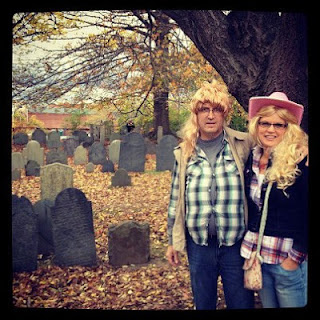 Well, tonight is our last night here in Boston with the kids. I have missed home and all the other kids for Halloween though. Still how grateful we are for the chance to connect with our little Kai monster.
I hope all of you had a wonderful Halloween dear friends. Good night!

The witches fly
Across the sky,
The owls go, "Who? Who? Who?"
The black cats yowl
And green ghosts howl,
"Scary Halloween to you!"
- Nina Willis Walter