From the time I was a little girl, my Mom said that I love to color, draw or create anything. I remember one of my favorite gifts being a little table and chairs ( just my size ), so I could sit and create for hours before and after my nap. (Actually, that is about the same schedule I keep now...sew...create...nap...sew...create ). Funny how that works?
Anyway, one of the ways that I made money while I was a stay home Mom with 4 kids was selling my crafts at many of the local fairs. I would even have Open Houses at our home ( apartment or whatever ) and people could come through, have some cider and pumpkin bread as they shopped. Then when the kids were at school or in bed, I would make most of it. In those days I painted. I Tole painted just about anything and everything. As the kids got bigger, they even began to help...any wonder why they all are such talented artists? :)
After we moved from West Virginia (where I had my name and business established ) I had to start over at the beginning, which was School Craft Fairs. Typically School Craft Fairs aren't very profitable but it was a way to get my name out and to support the kids school. So after moving to Washington on Sept 24th,1987 I was in the first School Craft Fair by the end of October.
I will never forget, my booth was way down a very cold hallway. I wondered how in the world I would get any kind of traffic with my booth so far away. I also wondered if I would die of exposure first, because it was soooooooo cold.
I quickly made friends with the other poor Artist sitting the booth next to me. As we talked for the next few hours ( because no one was coming down the hallway shopping ), I began to look at her stuff ( which was sewn items ). I quickly realized how talented she was and nice.
Ok, long story short....we didn't die that day but I think we both caught a bad cold. We ended up trading some stuff, which was really fun, and then I got her number and told her that I would probably end up having an Open House at my home in the next few weeks and offered her to bring her stuff. That was the beginning of a wonderful relationship ( as they say ). We did well at our Open House and we have been together ever since, that was almost 25 years ago!
We worked together for many years, then my back gave out, and  I had to quit  the shows and just sell my patterns to magazines and then teach classes out of my home. Chris continued to do the shows and continues to amaze me with her sewing skills. Even though I have been out of the selling loop for years, we still try to get together each week and create something. What a neat time that is for me. I use many of the ideas we create for my Quilting Classes now, and she uses some for her shows and she now has a shop on ETSY.COM
Wow, ETSY would have been a much easier way to go to get out things seen by so many people. Technology has truly been a blessing for that. With just a click of your computer, you can view 1000's of handmade items from artists world wide.
You can find her shop Here:
Check it out, she has the best quality stuff ever! ( I know I am a little biased, but it's because I know it ).
So make sure the next time you are somewhere that is boring and you wonder how you ever got stuck there for hours, talk to the person next to you...it just may end up being your new Best Friend! Mine was!
( Here is a photo of us Oct 12th 1991 at yet another craft show! ) 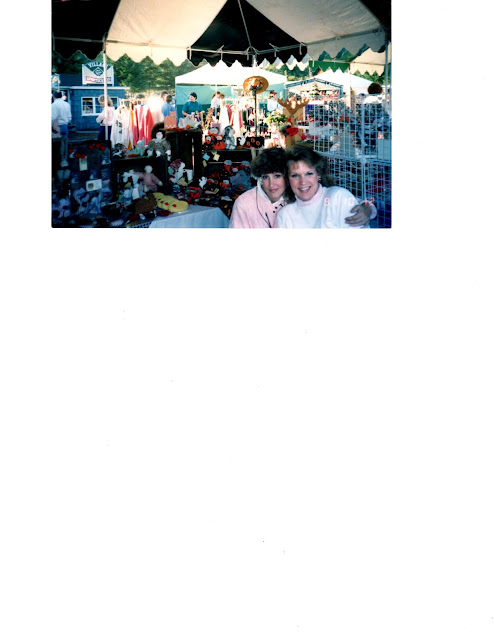