Today my mom accomplished a right of passage. (This is Lauren her daughter by the way, who is also a nurse and a short order cook for the next few days.) She asked me to write her blog tonight because for one she woke up during her procedure (colonoscopy), so they had to drug her a second time. And second…actually I should have let her write it…she is so drugged out it would have way more humorous if she did! Though in all honesty any kind of procedure with her is always a bit nerve wracking because of her previous cancer experiences. But the procedure went great and everything is alright…a huge relief.

Yesterday at the last minute the hospital called and told her to bring her living will. She freaked out a little, but to cheer her up all us kids called in what we wanted from her will. Amy called the piano, Brad the antiques (who assured my mom that he has matured and won’t sell them for monetary value. I doubt that :), me the hope chest and the sewing machines, and Lee wants the crocheted bed spread of our great grandmother (probably because it was the most expensive thing in the house; he was kind enough not to say that out loud). My dad finally said, “What do I get?” To which I replied, “The right to re-marry.” She didn’t think it was as funny as we thought, which was evident of the bedroom door slamming. :) I was quite proud of myself, I usually can’t think of those come backs till later.

So for now it looks like Amy and I don’t have to make three thousand quilted tissue holders, like she requested, for her funeral. Thank heavens for that. (But she did come home, completely out of it, and have my dad write down all the names of the nurses so she could send them all a thank you card. Go figure. Only my mother.)

I know my mom usually puts a picture with her blog, but the only ones I have that are relative are the pictures of her colon that Dad brought home. Didn’t think that was quite appropriate to be that open. So for the heck of it we have a picture that has nothing to do with anything, but it is a inside joke of the family. This is not the last meal she ate but an family pet that my brother thought he’d have some fun with. 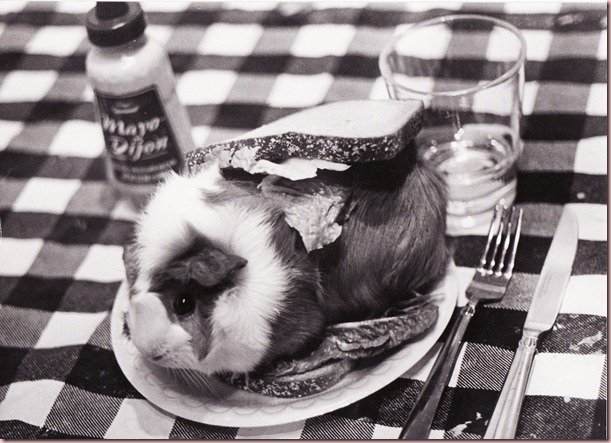 “The road of life twists and turns and no two directions are ever the same. Yet our lessons come from the journey, not the destination.” ~Don Williams Jr.

glad to hear everything went well.

thanks for the update Lauren!

So glad to hear everything is ok!!! Thinking of you!
Love ya!
Brittany

Glad Lynn's colon is good for a few more years! :) Thanks for the update and the good shot of humor!