The gift of a BEAR!

About 8 years ago, a friend of mine called and asked if I had time to counsel with a  13 year old girl. When I asked for the details, she said that this little girl had been abused by her Father for years but finally got someone to believe her. The Father was just put in jail and the whole family was falling apart, with no income… and the from the whole mess. I asked about the Mother, did she know about the abuse ( which in most cases they do ) and how good of a support was she to this daughter? Their story is like so many others I have heard throughout the years, the Mother keeps telling the kids how great their Daddy is but that he just made a bad mistake. So she is part of the problem. I next asked if the girl had been to counseling, to which my friend replied yes, but the Mother insists on going in with her, and never stops telling her what to say. So the girl doesn’t want to go back to counseling. She had mentioned to the girl that she had a friend she could talk to and asked her if she would be willing to meet with me.

I have done counseling for over 25 years now with victims of abuse ( no I am not a counselor by schooling but life, my position has always been to just try to help them enough to get to counseling.) It is never easy, but I have to admit the younger the child… the harder it is on my heart. I am sure it is because I can relate soooooooooo well. Although it was my Grandfather that abused me, incest is still incest and does a number on your ability to TRUST!  I remember getting down on my knees and asking my Heavenly Father to guide my thoughts and words in such a way that it would help this sweet girl.

Well, the day came and I went out and met her Mom but asked if she could stay in the car with my friend, so I could speak to her daughter alone. I also mentioned that I would stay by the window so she could see me, just in case she didn’t feel comfortable with me being alone with her kid, for whatever reason. I just needed to let this girl talk from her heart without her Mom telling her what to say and think, and yet I know the Mom didn’t know me at all…so I stayed by the window. When the girl came in and my friend introduced her to me, you could just feel what she was thinking by her mannerisms. She had her arms folded across her chest, she had a look on her face like… who are you, and why do you think you can help me? I asked her if she would like to sit down and then I just started asking some basic questions to break the ice, like …so where do you go to school? How many kids are in your family? What do you like to do for fun?  It was during that time that she asked me why I had so many teddy bears? You see I have been collecting Teddy Bears ever since I became a Mom. I always loved stuffed animals and bears seemed to be my favorite. I knew that for all the holidays that the kids would want to get me something, so I started collecting Teddy Bears. It is something that I would have liked to do as a child but because of my abuse, much of my childhood was lost…the bears remind me to help give that childhood to every child I meet. Plus, they also seem to remind me to take care of myself and encourage others to do the same…surround yourself with things that you love!

As I began explaining to her about the bears and my childhood, you could see her whole body relax and get comfortable. She somehow knew she was safe and with someone who had truly been there and could understand. Our few uncomfortable few minutes turned into an hour and half, and she asked if she could come back again. We got to meet I think 2 or 3 times again before their family had to move. Since her Dad was in jail, they had no income and so they were going to go live with her Grandparents… who she assured me, were good people that she could trust and be safe with. I was sad when I heard how soon they were going to have to move. I tried quickly to think of a gift for her that she would always have and would remember me by. As my girlfriend and I were tossing around some of those gift ideas, we finally thought that we should go to the store called BUILD A BEAR and make a bear for her and her sister ( who had been abused too, but wasn’t ready to talk about it ).

The day to go to BUILD A BEAR came, and we had so much fun picking out just the right bear for my dear friend and her sister. One of the options that they had there at the store was …if you wanted to you could buy a little voice recorder to be put into the bear. That was just what we needed, it was perfect. Well, we at least thought it was until we tried to say all the things we wanted to these girls, in just a couple of minutes. We went to the back of the store, because we had to keep re-recording our message because the beeper would go off before we finished. We both were crying when we tired to record how much we loved these girls; and as we told them how important they were. It seemed just as we were about to finish and tell them that we would always be there for them ….the beeper would go off again. It was funny but  not really. We laughed each time we got beeped, and then we would cry every time we tried to share out thoughts with this young victims. We must have been there over an hour, when finally the manager came back and asked if there was anything we needed. I am sure she was a bit worried about us, if she had been watching us the whole time. As we explained our story to her, she got tears in her eyes and told us that she would like to give the bears to us, as part of her way of helping. I can’t remember if I sent her a thank you note or not, I hope I did.  I still remember the kindness of that stranger. So Build a Bear has always had a special place in my heart. Years later when that girl was 18 years old, she sent me a Thank you letter. She told me her life was good and safe, and then she shared all the things she was planning for her future. She said that she loved herself now, for the first time in her life. She told me thanks again for the bear, and what that meant to her throughout the years.

Now you can imagine how excited I was when my son Lee came home a few weeks ago and told me that he had just got hired on at Build a Bear! I was thrilled. I am going to have to take Angie there and make a bear that we can give to someone in need this Christmas. She of course thinks about all the things she wants for Christmas but… she has always had that sweet spot in her heart for others who don’t have as much. I think that will be a great Christmas tradition to do with my Grandkids. Jenny is too young to understand but maybe by next year, she will be ready? I can hardly wait to go. Sorta glad that we don’t have to do the voice thing this time, I still think I would cry no matter what I said! I probably shouldn’t do that, it would really embarrass Lee in front of his co-workers! 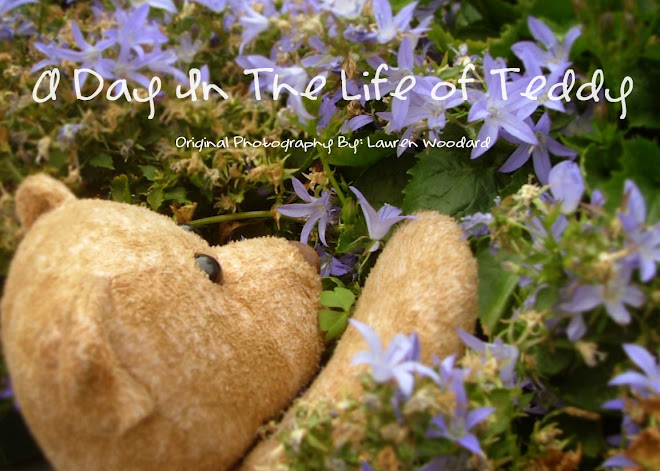 I don’t have a photo of a Build a Bear but…my daughter Lauren has a teddy bear that she has had for years, and has photographed and made cards from them. So you can see Teddy Bears have a special place in our hearts around here for a long time!     http://wwwlifeofteddy-lauren.blogspot.com/

"Age simply doesn't enter into it! The older the friend, the more he is valued, particularly when he shows so visibly the characteristics that we all look for in friends. You have only to look at a genuine teddy's face to see at once the loyalty, common sense, and above all, dependability behind it."      ~Peter Bull

"Wake in the deepest dark of night and hear the driving rain. Reach out a hand and take a paw and go to sleep again."     ~Charlotte Gray

"There's just something about a Teddy Bear that's impossible to explain. When you hold one in your arms, you get a feeling of love, comfort and security. It's almost supernatural."   ~ James Ownby

"In a world where everyone seems to be larger and louder than yourself, it is very comforting to have a small, quiet companion."    ~Peter Gray