Looking for the good

I heard on a radio talk show the other day, a lady who was a scientist and also a cancer survivor. I only heard the last part of the show, but the jest of it was that she opposed all the pink ribbon and all the false hope that goes along with it for cancer survivors. She said as a scientist, they have never proven the theory that being positive really makes a difference. She found something wrong with all the tests that tried to prove otherwise. It made me upset as I listened to her. I agreed on one thing that she said though " We pretend to know a lot about cancer, but we just don't know enough yet". I know that is true but there are 1000's of scientists, doctors and others out there, trying to find out more. I think we need to appreciate that. As for the positive outlook and hope that the pink ribbons, or anything else bring, I strongly disagree with her. I don't have to believe what she or anyone else says about HAPPY THOUGHTS, because I personally have felt the difference in my own life. I am better, stronger, happier, healthier (and a lot more fun to be around) when I chose to look for the good in each day.

How grateful that I don't have to just take her word for it. I don't care what her latest studies have shown. As always the only place to get ABSOLUTE TRUTH is from God. There are 1000's of scriptures on Hope, Faith and Charity, all of which can make a huge difference on how we view our life...as bad or good! 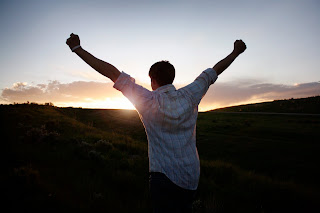 An old story is told of a king in Africa who had a close friend with whom he grew up. The friend had a habit of looking at every situation that ever occurred in his life (positive or negative) and remarking, "This is good!"

One day the king and his friend were out on a hunting expedition. The friend would load and prepare the guns for the king. The friend had apparently done something wrong in preparing one of the guns, for after taking the gun from his friend, the king fired it and his thumb was blown off. Examining the situation the friend remarked as usual, "This is good!" To which the king replied, "No, this is NOT good!" and proceeded to send his friend to jail.

About a year later, the king was hunting in an area that he should have known to stay clear of. Cannibals captured him and took him to their village. They tied his hands, stacked some wood, set up a stake and bound him to the stake. As they came near to set fire to the wood, they noticed that the king was missing a thumb. Being superstitious, they never ate anyone that was less than whole. So untying the king, they sent him on his way.

As he returned home, he was reminded of the event that had taken his thumb and felt remorse for his treatment of his friend. He went immediately to the jail to speak with his friend. "You were right," he said, "it was good that my thumb was blown off." And he proceeded to tell the friend all that had just happened. "And so I am very sorry for sending you to jail for so long. It was bad for me to do this."

"No," his friend replied, "This is good!" "What do you mean,'This is good'? How could it be good that I sent my friend to jail for a year?" "If I had NOT been in jail, I would have been with you." ~ Unknown

"There is a divine purpose in the adversities we encounter every day. They prepare, they purge, they purify, and thus they bless."  ~ James E. Faust  May 1979

"Our task is to become our best selves. One of God's greatest gifts to us is the joy of trying again, for no failure ever need be final."  ~Thomas S. Monson, May 1987
Posted by Lynn at 4:26 PM