Well, today was Jeff and I's 28th Wedding Anniversary! We actually celebrated it February, because we weren't sure if we would have a job by now or not, but luckily we do. It was a great day because we had sunshine, and I am still married to my best friend.

It is late but I wanted to share this beautiful love story that I found. I hope you enjoy it, good night! 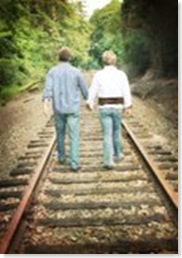 A LOVE LIKE THAT
I was 23, and all the way to the hospital I'd been composing what I would say to Mama before they took her to cut into her heart, whose center I supposed myself to be; hadn't she told me all my life I was the most important thing in the world to her?
Threading my way through the hospital corridors, I practiced my opening line, which  had to strike just the right note. Who but I could give her strength and confidence she would need? Whose face but mine would she want to be the last one she saw before they cut her open and died probably? Whose kiss but mine...?
I turned a corner and there was my mother lying on a stretcher in the hall, waiting for them to come for her. My father was standing over her. Something about the two of them made me stop and then, as I watched, made me keep my distance, as if there were a wall between us, and around them.
It was clear to me at that moment that for them, nothing existed outside them, nothing; there was only the man, the woman. She didn't see me, nor from the looks of it care much whether she did. They weren't talking. He was holding her hand. She was smiling into his eyes; and they were, I swear, speaking a language that at 23 I hadn't begun to understand, much less speak myself. But I could see them do it, literally see them, and I moved closer to see more, stunned, fascinated, very jealous that I had fallen in love with someone, married him, divorced him and never once come close to what I was looking at in that hall.
Next time, I said, I will know better. I will love like that.   ~ Linda Ellerbee


"The most important thing a father can do for his children is to love their mother."

"The most important thing a mother can do for her children is to love their father."