Learning to live within the framework He sets!

I read a book years ago called IN THE EYE OF THE STORM by John H. Groberg. The book was about his life as a missionary in Tonga. It was an amazing book of faith and trials. Here is one important lesson that was mentioned in the book. 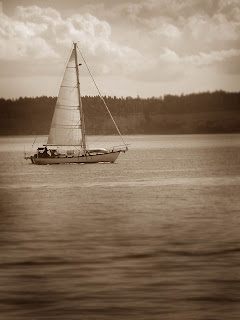 "I learned a lesson in patience once on a trip to Uiha ( in Tonga). We had left Pangai about noon with very favorable winds and made it to Uiha in just a few hours. We had some preaching engagements that evening, so we stayed overnight on Uiha.

Early the next morning, we left Uiha just as the sun was rising, and I felt sure we would be back to Pangai by early afternoon. I had been up late and was tired, so after helping get us started. I lay down in the boat and went to sleep.

A few hours later when I awoke, I could see an island not too far away. I told the others how happy I was to be so close to Pangai. The captain looked at me and said, "That's not Lifuka (the island pangai is on), but Uiha."

I was very surprised, even upset, and said, "We've been going for several hours. What have you been doing?"

The captain patiently said, "The winds have been against us. Are you going to tell God that He doesn't know what He's doing? You have better calm down and learn to live within the framework He has set, and not try to force your schedule on Him."

His quiet, correct reasoning had a profound effect on me. I spent the rest of the day thinking about the implications of the truths he had spoken.

How often I have done the same thing. Tried to tell God that I didn't have time for this or that, or get frustrated because I thought things would turn out differently. How foolish to correct God. How much better I am, when I trust in His Framework of time. In the end, I always accomplish and learn things that I thought were impossible!

"The antidote to frustration is a calm faith, not in your own cleverness, or in hard toil, but in God's guidance." ~Norman Vincent Peale

"Calmness is the way we show that we are trusting in God."