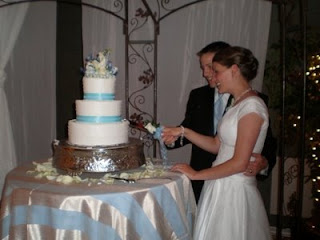 Well, they finally are married and off to Disneyland for their honeymoon. Doesn't that sound the fun? 27 years ago Jeff and I were preparing to be married, it was quite a different picture then this. We didn't have very much money, my parents didn't like Jeff and so we had to do the wedding all ourselves. (they wanted me to marry an old boyfriend) So even though we had a lot of obstacles in our path, we still were able to make it work. NO my dress never looked like this one of my niece's, and my cake never looked like that either but ....the smile on their face was...the same as Jeff and I had. Why, because we were marrying our BEST FRIEND and life doesn't get any better than that. We still look back at our photos and laugh and how sad it looked and how poor we were but....we were so excited and happy to finally be married!
I read an article the other day about marriage and I thought I would share some of it with you.

"THE IMPORTANCE OF CHOICE MAY BE ILLUSTRATED BY A HOMESPUN CONCEPT THAT CAME TO MIND ONE DAY WHEN I WAS SHOPPING IN A LARGE RETAIL STORE. I CALLED IT "PATTERNS OF THE SHOPPER." AS SHOPPING IS PART OF OUR DAILY LIFE, THESE PATTERNS MAY BE FAMILIAR.
WISE SHOPPERS STUDY THEIR OPTIONS THOROUGHLY BEFORE THEY MAKE A SELECTION. THEY FOCUS PRIMARILY ON THE QUALITY AND DURABILITY OF A DESIRED PRODUCT. THEY WANT THE VERY BEST.
IN CONTRAST, SOME SHOPPERS LOOK FOR BARGAINS, AND OTHERS MAY SPLURGE, ONLY TO LEARN LATER---MUCH TO THEIR DISMAY---THAT THEIR CHOICE DID NOT ENDURE WELL. AND SADLY, THERE ARE THOSE RARE INDIVIDUALS WHO CAST ASIDE THEIR PERSONAL INTEGRITY AND STEAL WHAT THEY WANT. WE CALL THEM SHOPLIFTERS.
THE PATTERNS OF THE SHOPPER MAY BE APPLIED TO THE TOPIC OF MARRIAGE. A COUPLE IN LOVE CAN CHOOSE A MARRIAGE OF HIGHER QUALITY OR A LESSER TYPE THAT WILL NOT ENDURE."
He goes on later in this article to say..."EACH MARRIAGE STARTS WITH TWO BUILT-IN HANDICAPS. IT INVOLVES TWO IMPERFECT PEOPLE. HAPPINESS CAN COME ONLY THROUGH THEIR HONEST EFFORT. THAT EFFORT WILL SUCCEED IF EACH PARTNER WILL MINIMIZE PERSONAL DEMANDS AND MAXIMIZE ACTIONS OF LOVING SELFLESSNESS." ~ Russell Nelson
I have to admit, I did date a lot (shopped around) and I am so grateful that I studied my options carefully and made the right choice!(selection!) My goal was to MARRY THE RIGHT PERSON, AT THE RIGHT TIME, IN THE RIGHT PLACE AND FOR THE RIGHT REASON. Yes, we both learned early in our marriage that we both weren't perfect, and so it has been a lot of hard work but sooooooooo worth it. So I wish the best to my cute niece and her sweet husband. I hope that they work hard at their marriage and realize what joy can come from it.
I will close with a quote that I like that seems to match with the theme tonight. Thank you for your friendship and love.
"HARMONY IN MARRIAGE COMES ONLY WHEN ONE ESTEEMS THE WELFARE OF HIS OR HER SPOUSE AMONG THE HIGHEST OF PRIORITIES." ~ Russell Nelson