I am so sorry that I couldn't write about everything last night, I did not mean to scare you, but only to ask for support until we could get more information. Jeff and I both have struggled with our energy levels and Jeff has had quite a few different medical problems going on lately and everyone was confused at what to do. My gut told me that for weeks that Jeff was in some time of danger but I didn't know exactly what. I thought it was his heart but wasn't for sure. Each day he has looked worse and worse and kept saying that something felt weird in his body and wrong. The last few weeks when we would walk in the evenings, he would have to stop because of pains that he was having in his lungs...that's where the pain felt like it was. So he was checked out for that too. Finally a week or so ago, he went in to the Dr for fatigue and he immediately suggested that he see his primary care DR and get his heart checked out. He had a EKG a week and half ago and it came back abnormal. Jeff has always had a bit of trouble with his heart, his dad passed away at the age of 56 (or somewhere around there) from a massive heart attack. His mom also had heart problems, so we had every reason to be worried.

When he came home from that appointment, he told me that they wanted him to have a stress test in a week or so. Talk about stress, it stressed me out that they were going to have him wait that long before his did the test. The test was for today May 5th. By this past weekend Jeff's energy was getting worse and worse, his coloring was terrible and the pain in his chest was happening MORE often with LESS exertion. My prayers were every day that I would know what to do if he had a heart attack and that even better yet, he could get into the Dr. for the test before that happened.

I woke up yesterday and heard someone in the house. Jeff and the kids are usually gone when I get up ( Jeff has been trying to let me get more sleep since my treatments) and so I got a bit nervous. I came out to find Jeff still home, I asked him what he was doing and why he was still home and his reply was..."Lynn, something still feels very weird and wrong, I don't think I should go to work today, I need to call the hospital". He was pacing the floor while he was talking to the nurse, so when I saw that, I immediately went and got into the shower. We were on our way to Virginia Mason Hospital before 9:00 am.

He immediately did the stress test and that didn't last long, the pain was getting there too fast. The DR met with us right away and told us that the test showed that Jeff probably had a blockage and that we needed to do an Angioplasty right away. We went down to scheduling and they were full...of course. Then he told us to go home, have Jeff only rest and then come back tomorrow morning. I am telling you, I really felt like he should have stayed at that hospital. I prayed and prayed that he would make it till this morning and thank goodness he did.

At 7:30 am we left for the hospital and he was suppose to have the angioplasty at 10:00 but they took him in as soon as he was prepped. An hour later the Dr came out and talked to Amy and I ( Amy was a great support system today, thank you Amy girl!) and told us that he found 2 blockages in Jeff's heart arteries and that they were 90% blocked, that is why he has been feeling sooooooooooooo bad for soooooooooooooooo long. He later said how lucky he was that he didn't have a massive heart attack. They were going to have to go ahead and put 2 stents in to help get his blood flow back. I thanked him and then reminded him how much I needed Jeff and how much I appreciated if he and his partner can do the very best they can. Now I know he probably always does his best but, I needed him to know that Jeff is my BEST FRIEND ( that is saying a lot for me, I have a lot of BEST GIRL FRIENDS, but only one BEST GUY FRIEND and I just happened to be married to him too!) I wanted him to know that I was counting on him to do his very, very best and I think he got the message.

One hour later they came back and told us that he was doing good, the procedure was a success and would be back in his room soon and that we could go into see him soon. After he got back to his room and things got settled, then the other Dr. (who actually did the stents) came in and showed us the pictures of the arteries, it was amazing that he could even function at all... with that much blockage and then he told me they found another area that was blocked when he got in there, so he actually had to put in 3 stents. But we were blessed that he did not have to have OPEN HEART surgery!

So Jeff is doing much better, he got up and walked around some this evening and ate lunch and dinner. I will pick him up tomorrow morning and he is to be down for a few days and then by Monday he should be back to work and normal stuff. He will also start PT for the next 6 weeks to get him back in shape. So your prayers were heard and I can't thank my Heavenly Father enough, that I get to keep Jeff for some more years. I really don't know what I would do without him, he is my ROCK!

Some one said today, "Lynn, I can't believe how much your family has been through the last year and a half. When you finally write that book about your life, it is definitely going to have be called FICTION, because no one will believe anyone could go through so much and have that many trials!"  I am going to write that book soon and it will have all the blessings, and miracles that we have been given. It will be a best seller....if to no one else but me and my family, just because we can say ...we lived through it and grew so much and were always blessed.

Need to head to be and hopefully not have to grow any more...the next few days ( I was going to say years but, who am I kidding?) Good night dear friends. Thank you again for your thoughts and prayers and for more angels, who have been dropping off food and offering rides and everything else. Thanks a million!

P.S. Hopefully this post will explain why I haven't been quite as talkative, sociable an maybe even a bit sad lately. I have had a few things on my mind, but this was by far one of the biggest. 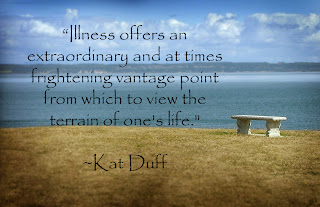 "Trouble is part of your life — if you don't share it, you don't give the person who loves you a chance to love you enough."   ~ Dinah Shore

"To love is to receive a glimpse of heaven."  ~ Karen Sunde

What a relief to know you two are close enough to the Spirit that you were able to be warned and make wise decisions. I'm glad to hear he's doing well, we were concerned for you!