Someone sent me this story of NOAH'S ARK, it was simply amazing!

Working Replica of Noah's Ark Opened In SCHAGEN, Netherlands ..
Man Builds Noah's Ark to the exact scale given in the Bible 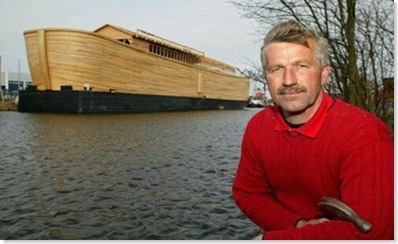 The massive central door in the side of Noah's Ark was opened the first crowd of curious townsfolk to behold the wonder. This replica of the biblical Ark was built by Dutch Creationist Johan Huibers as a testament to his faith in the literal truth of the Bible.

'I knew the story of Noah, but I had no idea the boat would have been so big ' There is enough space near the keel for a 50-seat film theater where kids can watch a video that tells the story of Noah and his ark. Huibers, a Christian man, said he hopes the project will renew interest in Christianity in the Netherlands, where church going has fallen dramatically in the past 50 years.

I wonder if Johan knew before he under took this project, what type of criticism he would get and how far his testimony of the Bible would be spread by such a project? The article does not tell that he had conflicts, but it is never too far away especially when someone is trying to do good. I would love to travel there and see it. I have to give Johan my respect, for sharing his testimony and beliefs with others. In a world where people are constantly denying the reality of God, I am grateful for someone who would be so bold, so brave and so committed to the mission that he was doing... that he did it any way. If it is true that he did it, to simply share his believes, I would say that in and of it's self is amazing. How many of  us would stand up and share our testimonies of Christ like that?  Yes, it was an amazing story, I hope that many, have been able to enjoy and learn more about the scriptures and about God, because of this man's commitment to this project.

"Our deepest fear is not that we are inadequate. Our deepest fear is that we are powerful beyond measure. It is our light, not our darkness, that frightens us most. We ask ourselves, 'Who am I to be brilliant, gorgeous, talented, and famous?' Actually, who are you not to be? You are a child of God. Your playing small does not serve the world. There is nothing enlightened about shrinking so that people won't feel insecure around  you. We were born to make manifest the glory of God that is within us. It's not just in some of us; it's in all of us. And when we let our own light shine, we unconsciously give other people permission to do the same. As we are liberated from our own fear, our presence automatically liberates others." ~ Maryanne Williamson