I was talking to a friend the other day about how hard it is to put your husband first, when the kids seem to have so many needs. I was trying to encourage her that even though it is hard, it is and will be the best thing that you can ever do for your marriage and your kids. Keeping the love alive in a marriage (throughout the years) is no small task. It takes soooo much work.  I should know... because Jeff and I have been married for 27 years and yes, it has been hard work. Some of the lessons were hard learned but well worth it.

"It is not a lack of love, but a lack of friendship that makes unhappy marriages." ~ Friedrich Nietzsche

Jeff is my best friend, don't get me wrong...my kids are my pride and joy but we learned early in our marriage that it was vital that we put each other first and then everything else seemed to fall in place. When we don't do that, there was hurt feelings and contention in our home. The kids even got to the point that they would tell us to go on our date night (if we had missed it a week or so) because they wanted us to be happy again. Yes, kids know and love that their mom and dad are connected. That gives them a basis a, firm foundation to feel happy and safe. It is vital to remember that and when I read this sweet story out of the Chicken Soup for the Soul book, it reminded me of this very subject.

"Nothing can bring a real sense of security into the home except true love." ~ Billy Graham

So please stop, take time out and connect with your husband or wife. Try to remember all the reasons that you fell in love the first time. Marriage is the foundation for your happy home. I am grateful to say that when I was in the hospital, heading in for my mastectomy, that Jeff and I were speaking the very same language that this lady was mentioning in her story. We don't speak it every day, but we should and yes....even after 27 years, we are still working on it. 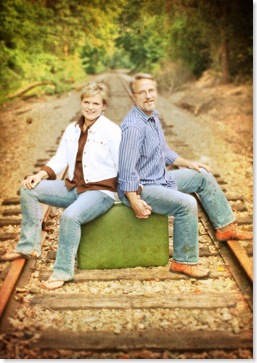 I was 23, and all the way to the hospital I'd been composing what I would say to Mama before they took her to cut into her heart, whose center I supposed myself to be; hadn't she told me all my life I was the most important thing in the world to her?

Threading my way through the hospital corridors, I practiced my opening line, which  had to strike just the right note. Who but I could give her strength and confidence she would need? Whose face but mine would she want to be the last one she saw before they cut her open and died probably? Whose kiss but mine...?

I turned a corner and there was my mother lying on a stretcher in the hall, waiting for them to come for her. My father was standing over her. Something about the two of them made me stop and then, as I watched, made me keep my distance, as if there were a wall between us, and around them.

It was clear to me at that moment that for them, nothing existed outside them, nothing; there was only the man, the woman. She didn't see me, nor from the looks of it care much whether she did. They weren't talking. He was holding her hand. She was smiling into his eyes; and they were, I swear, speaking a language that at 23 I hadn't begun to understand, much less speak myself. But I could see them do it, literally see them, and I moved closer to see more, stunned, fascinated, very jealous that I had fallen in love with someone, married him, divorced him and never once come close to what I was looking at in that hall.

Next time, I said, I will know better. I will love like that.   ~ Linda Ellerbee

"The most important thing a father can do for his children is to love their mother."

"The most important thing a mother can do for her children is to love their father."