If you can't beat them, join them!

Friday the Amy and the girls came over to spend the day. I was surprised that they didn't say much about Nana still having Winter/ Christmas decorations up. I know ...like me, we were  just glad that I was healthy enough to have them come visit and that they were cold and germ free  ( at least we hoped ). I still was worn out from the day but really I just sat around and played with Audrey, watched movies with the girls. Amy made lunch and when John came ... he made dinner. So still it wasn't really much to do but just sweeping the floors before and straightening things up a bit ( since I have been living like a man for the last 9 weeks ( nothing personal to all the men out there ), so I had to clean up some. Especially since Miss Audrey is crawling everywhere. She is like a little Hoover when it comes to picking things up off the floor ( and of course putting them in her mouth ).
What made me laugh on Friday was that a couple of weeks ago it was sunny and I just took the old greenery and berries off the deck and threw them over the banister onto the back yard. I had high hopes are going down later and putting them in the Yard Waste container, but that never happened.
So when Angie and Jenny went outside to play in their play house on the deck, they asked for tons of wet paper towels so they could clean it up. It had gotten quite dirty from the winter weather. Then I noticed they kept going down stairs and getting stuff. Yes, you guessed it...they went and picked up all that old greenery and berries and decorated their newly cleaned house. I guess since Nana's house still had Christmas us they thought... they could do the same to theirs! :) 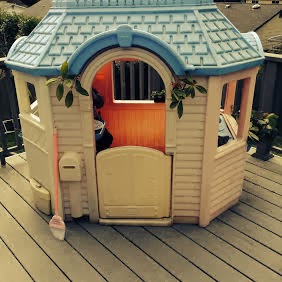 I guess the old saying " If you can't beat them, then you mind as well join them" is appropriate.
So I made up some snacks and of course with their dinosaurs in hand, they had a lovely snack and tea party. 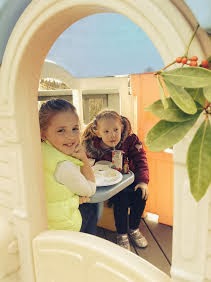 I just love seeing them, I have missed doing sleep overs and tea parties with them, since I have been sick for so long. They just seemed happy to be here, Christmas decorations and all! Oh how we wished Kai lived close enough to come join in on the fun! 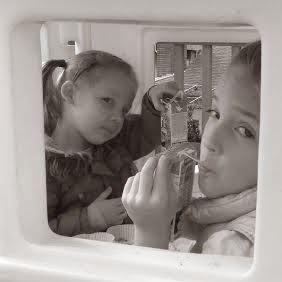 At one point, I had to take a nap, so Amy took the girls to our park, this was Audrey's first time on a swing, she loved it. Look closely and you can see her little fangs that are coming in, still waiting on the front ones. It was a good day but more than I have done in a while. So Saturday I was a bit more tired and my cough was back a little bit. I felt like I had gone backwards maybe a step or two. I was discouraged, it seems like anything really wipes me out. I stayed in my PJ's all day. Thankfully Jeff spent the day doing errands, what a trooper. I stayed by the fire and did some drawings. Then since my appetite is back, I made up a week menu. Tried a new soup for dinner and it was great, tried a new snack...high protein, low carbs...it was nasty. But at least I tried. So I went to bed trying to remember that this is going to be SLOW, very slow I guess!
Good night dear friends!