Tonight as I sat here working on the computer, I could hear all the teenagers outside heading to the park that is near our home. We live in a pretty safe neighborhood, but it seems like when there is a holiday, weekend or school is out... then there is a free-for-all in the park. Many times that doesn't lead to anything good. I was wondering why they were out there on a school night and then I remembered that there is no school tomorrow. I quickly asked Jeff to make sure the cars were locked up because... you know how teenagers are!

I smiled as I said that, because we have one more teenager at home and actually we are quite fond of him. For a school dance this year, he and his date dressed up like Clark Kent ( Superman ) and Louis Lane. Here is the photo of him. When I looked at the photo again tonight, I remembered all the potential that these TEENAGERS really have. I found this story that backs up my thoughts. 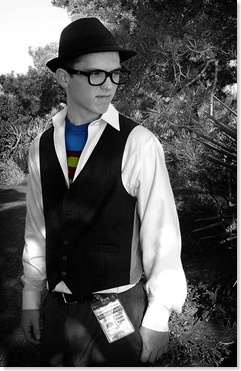 "I can't count how many times people have uttered, while shaking their heads in obvious disappointment, "I just don't know what is with teenagers today."

The other day I was in my car on my way to the farmers market with my friend Jan when we passed two teens standing by the side of the road with a car wash sign. My car was filthy  and my heart was full, so I pulled over. There were teenagers everywhere. There was a group directing the cars and another group spraying them down. As sponges were wiped over every square inch of my dirty car, I sat enjoying the little water battles and many silent scenarios that were so obviously taking place. I couldn't help but wonder how many crushes, how many new friendships and how many little insecurities were in the air on this beautiful Saturday afternoon. I was amazed at how forty to fifty teenagers had devoted their Saturday to washing cars, and I was curious what their motivation might be.

At the end of the assembly line I handed them a twenty-dollar bill and asked what they were raising money for. They explained to me that a friend of theirs, C. T. Schmitz, had recently died of cancer. He was only fifteen years old and six-feet-two. He had gone to school with a lot of the teenagers who were there that day and each of them had memories of a boy sweeter than any they had known. His friend Kevin had decided to put this car wash together because he wanted to honor his friend and also bring together his classmates with his boy scout troop. He told me that they wanted to plant a tree in front of their school and if they raised enough money they would put a plaque there also. Both would be in memory of their friend C. T.

They handed me a bag of homemade cookies with my receipt and we drove away. I asked Jan to read to me what the tag that was tied to the bag said. It said simply, " Thanks for helping us plant a tree for C. T."

Yeah! I don't know what is with teenagers today! (Kimberly Kirberger  Chicken Soup for the Teenage Soul II)

So may we look at our teenagers, and remember what incredible people they are and remind them of their limitless potential. I believe that is our job as their friends,teachers, leaders and family!

"Your children need your presence more than your presents."  ~Jesse Jackson


"It's not only children who grow.  Parents do too.  As much as we watch to see what our children do with their lives, they are watching us to see what we do with ours.  I can't tell my children to reach for the sun.  All I can do is reach for it, myself."  ~Joyce Maynard