Leaning into the curves

Today is Jeff's birthday, he really didn't remember that, but all of us did. I am not sure if Jeff's family made a big deal out of birthdays or most holidays but to celebrate each birthday and holiday is our family tradition. I don't know, life is just hard enough...I think it is important to remember those special days in our lives. We went out to lunch today (after my  Dr. gave me the ok, that my pneumonia was gone ) and then we went to a book store for a minute. One book title that caught my attention was called Learning to lean into the curves or something like that. I didn't even  have to pick it up to understand what the title meant, I have heard Jeff say that more than one occasion.

I got Jeff a motorcycle a couple of years ago, many of my friends told me that is the craziest thing I could have ever done. They didn't want their husbands to have one, they are just too dangerous. Well, if you would have told me that years ago, I would have agreed with you 100%, but ever since I was diagnosed with Cancer, my perspective in life has changed some. I don't want to be living life scared of a lot of things, like I have done most of my life. Now remember, it isn't me that bought a motorcycle for myself, but for Jeff. I had no idea that he always dreamed of having one. My logic was, the money was given to me and even though we put most of it to good sensible uses...paying of bills and putting some away for college for the kids, paying for my cancer bills...I felt a real need to get Jeff something that he would really love. I had no idea when I asked him, that it would be a motorcycle. Yes, I thought they were just too dangerous but for some reason I knew that he was a grown man, who had spent most of his adult life being the most incredible husband and father. He never asks for anything for himself, he never even took too  much time when the kids were growing up to do things for himself. I don't think I have ever given a gift that was so appreciated in my life. He can hardly wait each morning to check the weather and see if he can ride his bike to work. Wouldn't it be great if we all had something that brought such joy and pleasure to us each day that we could hardly wait to get up? 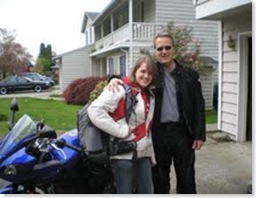 Now having said that, I have to admit that riding with him on the bike scares me to death. It isn't actually my thing. Lucky for Jeff some of his kids don't feel that way, and can't wait to ride with  him... as you can see in the photo with Lauren. I actually rode on it with him on my 50th birthday, never prayed so hard in all my life! :) I had a real problem with the curves. Jeff and the bike would lean one way and I would lean the other. I just knew if I leaned with him that we were going to fall over and think of all the injuries!  ( See, obviously I am not there yet ).

I do think that learning to lean into the curves has a bigger and more profound meaning that just on motorcycles. I think it applies to life, so often we fight the hard parts, the scary parts and so we often  pull too much the other way, making it dangerous that way too. So tonight as I think of Jeff and the many things I have learned from him throughout the (almost) 32 years that we have been together, and I feel blessed. He is my best friend and even though life hasn't been easy for us, we have certainly learned how together to lean into the curves that life has thrown us. Now if only I could learn to do that on his bike.... someday! Happy Birthday Jeff!

"May you live all the days of your life."   ~ Jonathan Swift

"Grow old along with me!
The best is yet to be, the last of life, for which the first was made."   ~ Robert Browning

"No wise man ever wished to be younger."   ~ Jonathan Swift

Girl, you sound like someone I would have enjoyed talking to when my sister and I were doing research for that book you noticed, Leaning into the Curves.

A lot of what you said expresses the feelings of Molly, the main character, perfectly!

I hope you'll read the book--and let us know how you liked it.

Please tell Jeff Happy Birthday from the Nebekers!! Glad you are feeling better too. love ya!
p.s. my dad is almost 70 and he still rides his motorcycle!!