Yesterday my granddaughter Angie and I just had to start putting up Halloween decorations. We waited as long as we possibly could, but once Autumn began... we couldn't wait any longer. Angie is so excited now that her pumpkins are ready to pick, here is a photo of her first pumpkin and her first ear of corn too!

What a neat thing to teach kids, to plant and take care of something and watch it grow. Then after a lot of watering, watching and especially waiting, you are finally able to pick your harvest. There is a scripture in Proverbs that says...“As you sow so shall you reap”. That is true with many things in our lives, we can not expect to reap the benefits of something if we did not put the time and effort into it. Here is a cute story that goes along with this theme tonight. I hope you enjoy it! Night! 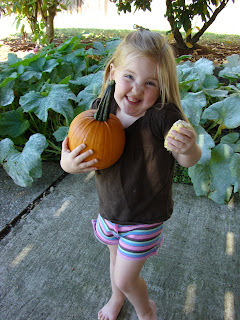