I think that all of us would love the opportunity to be famous for even a moment. There is an old saying that goes "Everyone deserves their 30 seconds of fame", or something like that. Well, yesterday our was our son's Bradley's birthday. He got his 30 seconds of fame and more, this past year at Brad's college they have a band festival or battle of the bands so to speak. It is called Guitars Unplugged. Brad and a few of his friends put together a band and decided to try out and they made it to the semi finals and got to perform on stage in front of 5000. They sang and played the song...Johnny Be Good. So here is a photo of our FAMOUS boy on stage ( he is the one on the far left, playing the guitar. 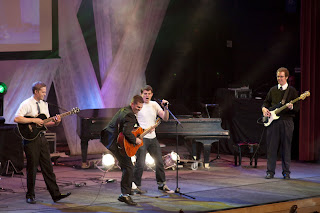 This story seemed fit for the theme of today...

Grandma Moses and Me

I'M TOO OLD AND IT'S TOO LATE, PLAYED OVER AND OVER IN MY MIND. I WAS DISCOURAGED AND EXHAUSTED AFTER ENDING MY MARRIAGE AND MY LAW CAREER AT THE SAME TIME. DESPITE MY INTENSE DESIRE TO BECOME A WRITER, I DOUBTED MY ABILITY TO SUCCEED AS ONE. HAD I WASTED YEARS PURSUING THE WRONG GOALS?

I WAS AT A LOW  POINT WHEN  THE VOICE ON THE RADIO BEGAN TELLING THE STORY OF GRADMA MOSES. ANN MARY MOSES LEFT HOME AT 13, BORE 10 CHILDREN AND WORKED HARD TO RAISE THE 5 WHO SURVIVED. STRUGGLING TO MAKE A LIVING ON POOR FARMS, SHE MANAGED TO PROVIDE A BIT OF BEAUTY ON HERSELF BY EMBROIDERING ON CANVAS.

AT 78, HER FINGERS BECAME TOO STIFF TO HOLD A NEEDLE. RATHER THAN GIVE IN DEBILITY, SHE WENT OUT TO THE BARN AND BEGAN TO PAINT. ON MASONITE PANELS SHE CREATED BRILLIANTLY COLORED, PRECISELY DETAILED SCENES OF COUNTRY LIFE. FOR THE FIRST TWO YEARS, THESE WERE EITHER GIVEN AWAY OR SOLD FOR A PITTANCE. BUT AT THE AGE OF 79, SHE WAS "DISCOVERED" BY THE ART WORLD-AND THE REST IS HISTORY. SHE WENT ON TO PRODUCE MORE THAN 2,000 PAINTINGS, AND HER BOOK ILLUSTRATIONS FOR  "TWAS THE NIGHT BEFORE CHRISTMAS WERE COMPLETED IN HER 100TH YEAR!

AS I LISTENED TO THE RADIO, MY MOOD CHANGED. IF GRANDMA MOSES COULD BEGIN A NEW CAREER AND SUCCEED AFTER 80, MY LIFE STILL HAD HOPE AFTER 30. BEFORE THE PROGRAM ENDED, I CHARGED TO MY COMPUTER TO WORK ON THE NOVEL I'D NEARLY ABANDONED.

"To accomplish great things, we must not only act, but also dream; not only plan, but also believe." ~ Anatole France

"If you lose hope, somehow you lose the vitality that keeps life moving, you lose that courage to be, that quality that helps you go on in spite of it all. And so today I still have a dream." ~ Martin Luther King Jr.

The Trumpet of Conscience