Today we left Columbia, Indiana today and stopped by Independence, Missouri till we stopped again. There is a quite a bit of history in that town. After a couple of hours there then we got back on the road and headed to Topeka, Kansas.
It was another beautiful day and so we were so grateful that the weather has been so nice. 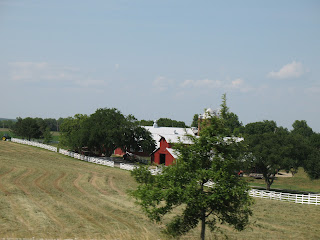 The car is packed so there isn't really any extra room. Funny because when we came started on this trip Shirley said that she was going to teach me how to pack lighter, but let me show you what we put on the cart and pull in and out of our room every day. Sorta thinking that maybe I have corrupted her. I have never been a very good packer, ok...I said it! But I do have other good qualities! :) 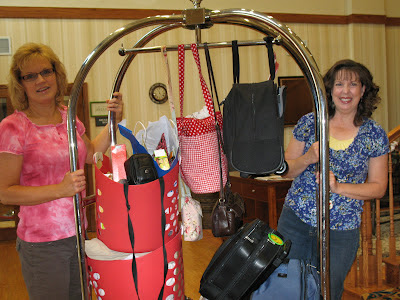 Speaking of what issues or problems people have...I found this wonderful article! Hope you enjoy it!
Good night dear friends!

Would you trade your life's packet of problems?

It’s been 30 years since one of the more memorable Sunday School lessons of my life. I was a boy sitting in the middle of a half-dozen other gawky kids learning about the gospel.
I don't remember where the lesson was supposed to fly, but I do remember where it landed. We had a surprisingly mature discussion with our teacher about something we dubbed our “packet of problems.”
We wondered: What if we were handed a packet of problems before this life? We thought of it as a spiritual envelope containing challenges we would later face during our mortal lives. Naturally, no two packets would be alike and we wouldn’t know the actual contents until the hour came to tackle them. But despite the unknown, perhaps we all agreed to bring our packet with us because we were promised the contents would never amount to more than we could bear.
I’ve thought of this many times through the years, and, even though I know it’s an invention of man and not some literal process, the notion has become a soft blanket during the hard times of my life.
Exactly one year ago, I set out to write a column on this topic. Using email, Facebook and my website, I issued a call for friends and readers to share — anonymously — their packets of problems. I was curious to know what challenges people were facing and how they were viewed.
Do we want to trade packets with others? Do we sometimes think our packet is packed with insurmountable problems while the neighbor’s is empty?
The responses were overwhelming, both emotionally and in sheer volume. I was so overcome by the stories that I shelved the column.
Now, with fresh eyes, I see that most respondents had remarkably positive attitudes about what they’d found in their packets, and almost all were beyond the roughest waters. Also, the responses came from people we probably know: neighbors, distant cousins or old college roommates we haven't connected with in far too long.
A sad number of the packets included divorce. One woman wrote, “I recently found out that my husband of two years has been cheating on me, and that he was cheating when I was pregnant with our now 9-month-old daughter. I now live with my parents and (seven) younger siblings and my husband and I are going through a divorce.”
Though her words are aching, her closing sentence gave a glimpse of a hopeful soul: “Don't get me wrong, I'm not complaining about my life, I have even more blessings.”
A father wrote about opening his packet of problems and finding that he would watch one of his children die, be accused of a crime he did not commit and be the victim of four layoffs in six years. The last job loss left him teetering on the edge of bankruptcy.
Would you trade your packet with him?
A wife described the night she discovered her husband had a pornography addiction. She later learned it stemmed from years of abuse at the hands of an older sibling. As he fought his demons, they lost their home, vehicles and jobs. Ending her email, she feared her packet was far from empty. But quite beautifully, she also wanted me to know she still has faith in Jesus Christ.
I’ve thought of these good people and their packets of problems almost everyday since my survey first began. I’ve considered how many times in my own life I’ve looked across the street or down the pew and wished I could have traded my packet for another’s. What a selfish thought!
My own packet contains challenges that are uniquely mine. They were crafted by the loving and perfect hands of a Heavenly Father who knows how to turn my weaknesses into strengths. Doesn’t he also know my limits and my potential?
Doesn’t he also know yours?
I know it’s not always easy, but I also know I should be grateful for my own tests and give thanks that he loves me enough to challenge and refine me. I should be faithful enough to know that the trials are blessings meant to better prepare me for what awaits in this life and the next.
What about you? Would you trade your life's “packet of problems" with your neighbor?
You can find the articlell here:

We have no right to ask when sorrow comes, "Why did this happen to me?" unless we ask the same question for every moment of happiness that comes our way.  ~Author Unknown

A bend in the road is not the end of the road... unless you fail to make the turn.  ~Author Unknown