I read this morning in the Chicken Soup for The Soul a story called Quality Time. It was a story about a lady who sometimes would go to the beach after work just to clear her head. On this particular day she saw a little boy and his dad spending time together, here were her thoughts " there is a father and child sharing some quality time, no doubt, I thought to myself sarcastically, and then I felt a little depressed by my reaction. Such pleasant father/child scenes always made me a little sad, a little jealous, for what I never had as a child. But I sure didn't need these thoughts now, not after the day I'd had. I closed my eyes tightly again and turned back toward the sea.

But it was too late. Bits and pieces of unhappy childhood memories were already pushing their way into my mind,"

She goes on to remember all the terrible things about her dad and her childhood, how he was a drunk, about his outbursts of anger, her parents bitter divorce and his dying soon after that ....alone and far away from them. She mentions the feelings that came with those memories and how life just seemed hopeless and seeing this parent and child just reminded her of that, something she never had.

Then she goes on to say..." I shook my head sharply and opened my eyes, trying to stop this melodrama in my mind. My breathing began to relax as I focused on the sights around me. There were the waves, still crashing. There was the sand, still damp beneath my feet. And down the beach, there was the boy and the man.

The child's laughter carried on the wind and drifted into my mind, echoing there, growing louder and louder until it seemed to fill my whole head. Such laughter! Such pure and simple joy.

Slowly, a new image began to form in my mind: a young girl propped up in bed, her pixie haircut framing a face lit up with joy and laughter. The image began to gain clarity, as if being focused by a giant mental lens. I could see a familiar pink bedroom trimmed in lace, stuffed toys long ago forgotten, and a plump, freckled face that I knew had to be mine. The laughter echoed again, and the image drifted back to include a dark-haired, handsome man sitting at the foot of the bed, telling a wonderful made-up bedtime story of friendly creatures, and a prince and princess who lived in a far-off and exciting kingdom. And as the story ended, the child realized that she was the princess and threw her arms around the man's neck and squealed, "And you were my prince, right, Daddy?"

She ends her story remembering good things, quality times that she did share with her dad but some how throughout the years, the good memories were pushed out of her mind and the bad ones remained and seem to take over completely. She then began to wonder what happened to her dad that made him drink and ruin his life, and her's for that matter? All of a sudden she felt sorry for her dad, compassion .... instead of bitterness and anger. She realized for the first time how much better she felt when she was able to think about and remember the good memories instead of all the bad ones. She now realized she had a choice, she actually always had the choice ...but the negative many times in all of our lives is much easier to entertain than the positive.

There were still those hard and terrible things of her past ...but she realized that the best thing she could do for her life is focus and remember the good times, the quality times, the good memories. She was thankful that she had even some and decided to keep her focus there, from now on.

I loved this story because I believe that I some times fall in that same circumstance. I wasn't really close to my dad. I was the only girl and I think he wasn't quite sure what to do with me?  I think many of my family members think that ! :) It does seem easier to remember us not being close, him being a yeller, and not sharing a lot together. I catch myself seeing other women now at my age, doing and sharing things with their dads and I can only imagine what that would have been like. I too even get a little jealous as I watch them.  But just like this story, I realize I did have some great memories with my dad, he was a great guy. He had a great sense of humor, he loved to serve others and he never met a stranger! He loved Christmas ...so I guess we did have some things in common after all.

I hope today, we will all try harder to push out the bad thoughts, the bad memories that truly don't serve us and focus on the good ones, even if there aren't a lot of them. Because being happy and having good thoughts can change anyone's day for the better. Plus, don't forget to make some incredible memories with your family and loved ones today, so that their good memories will last them forever! Take care dear friends!

'Memory is a child walking along a seashore.  You never can tell what small pebble it will pick up and store away among its treasured things."  ~Pierce Harris, Atlanta Journal 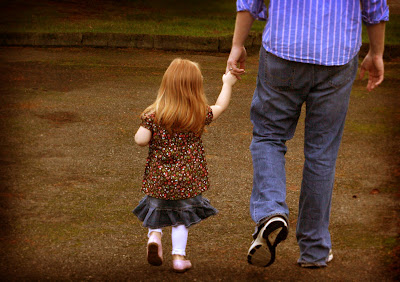 "It is never too late to have a happy childhood."  ~Tom Robbins