When Jeff and I began our family, we decided that we wanted our home filled with words that encouraged, uplifted, praised and inspired. We didn't want the kids to get used to saying words that put down or tore down each other. Of course as parenthood goes when it is forbidden, then it is much more tempting to say. So after a few ups and downs with words slipping out, we decided to tell the kids that they could say those bad words, but only if they were in the garage or after 10:00pm. For some reason I think that made them feel better because they felt like they had a choice. The nice thing for Jeff and I was...the garage was always so full or dirty that no one ever went in there and the kids went to bed between 8:30 and 9:00pm, so it worked like a charm! :)

I can remember being called an idiot, being told I was dumb and stupid and for soooooooooooooooo many years I really believed I was. Words are very powerful (for good and bad).

I love the words Thank You and we try to remember to use it ourselves just as much as we ask the kids to use it. It makes me feel that we love and respect each other more when we do. I will be the first to admit, that we are far from perfect in our home.... but we do really try to make it a place that is happy and safe for each of us and hopefully those who come to visit.

So tonight, with that in mind I found this cute story that reminds us to speak kind words to others and be very aware of unkind words and the damage that they cause. Good night and thank you for all of your encouraging words for me. 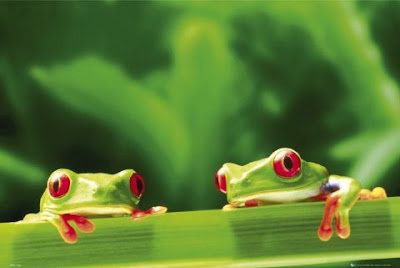 A group of frogs were traveling through the woods, and two of them fell into a deep pit. When the other frogs saw how deep the pit was, they told the two frogs that they were as good as dead.

The two frogs ignored the comments and tried to jump up out of the pit with all their might. The other frogs kept telling them to stop, that they were as good as dead. Finally, one of the frogs took heed to what the other frogs were saying and gave up. He fell down and died.

The other frog continued to jump as hard as he could. Once again, the crowd of frogs yelled at him to stop the pain and just die. He jumped even harder and finally made it out. When he got out, the other frogs said, "Did you not hear us?" The frog explained to them that he was deaf. He thought they were encouraging him the entire time.

This story teaches two lessons:
1. There is power of life and death in the tongue. An encouraging word to someone who is down can lift them up and help them make it through the day.
2. A destructive word to someone who is down can be what it takes to kill them.
Be careful of what you say. Speak life to those who cross your path. The power of words... it is sometimes hard to understand that an encouraging word can go such a long way. Anyone can speak words that tend to rob another of the spirit to continue in
difficult times. Special is the individual who will take the time to encourage another.

"WATCH YOUR THOUGHTS, FOR THEY BECOME WORDS.

WATCH YOUR WORDS, FOR THEY BECOME ACTIONS.

WATCH YOUR ACTIONS, FOR THEY BECOME HABITS.

WATCH YOUR HABITS, FOR THEY BECOME CHARACTER.

WATCH YOUR CHARACTER, FOR IT BECOMES YOUR DESTINY"

"BY SWALLOWING EVIL WORDS UNSAID, NO ONE HAS EVER HARMED HIS STOMACH" ~Winston Churchill

"TIME AND WORDS CAN'T BE RECALLED, EVEN IF IT WAS ONLY YESTERDAY" ~ Yiddish Proverb

I've been reading your blog for quite a few months now as I needed words of healing and encouragement and have found them here. Many thanks for your time, energy and love. Whether you are aware of it or not, you have helped me keep going in dark times and I am forever grateful for you.