I believe that we all want happiness in our lives. I also believe that many of us may have trouble finding it on a daily basis. In my reading I found an article about this very subject, and I would like to share part of it with you...

" 600 years ago on the New Year of 1412 in the small village of Domremy, France a baby girl was born who, a little later, changed the political and religious landscape of her world. Through military developments and a variety of personal religious experiences, Joan of Arc, sometimes called the Maid of Orleans, was made a captain in the French army at the tender age of 16. In a rather remarkable series of battles and victories, she brought acclaim to herself and her cause, inspiring not only the men under her command but also the entire French nation. Later she was captured, tried, and put to death---burned at the stake---her life complete at 19 years of age. 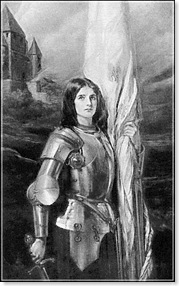 As the fires were being ignited around the stake to which she was tied, Joan was given a last chance to save her life and regain her liberty if she would deny her religious---and thus some of her personally motivated political---beliefs. She refused to deny anything she believed or anything she had said about her faith, and thus chose fire above freedom, and principle above politics. Maxwell Anderson, who wrote a moving drama about this young woman and her courage, has her say in his play as the flames begin to consume her, "THE WORLD CAN USE THESE WORDS...EVERY MAN GIVES HIS LIFE FOR WHAT HE BELIEVES; EVERY WOMAN GIVES HER LIFE FOR WHAT SHE BELIEVES. SOMETIMES PEOPLE BELIEVE IN LITTLE OR NOTHING, [AND YET] THEY GIVE UP THEIR LIVES TO THAT LITTLE OR NOTHING. ONE LIFE IS ALL WE HAVE, AND WE LIVE IT AS WE BELIEVE IN LIVING IT, AND THEN IT'S GONE. BUT TO SURRENDER WHAT YOU ARE, AND LIVE WITHOUT BELIEF----THAT'S MORE TERRIBLE THAN DYING---MORE TERRIBLE THAN DYING YOUNG" (Joan of Lorraine, act 2, interlude 3)  ~ Jeffrey R. Holland

This story of Joan of Arc's life is very impressive, she had a faith and beliefs that she stood by her... whole life. I believe that is where true Happiness comes from. I think we need to remember to be like her courageous, strong, truly understand our opposition and remember above all else ....what truly matters in this world!  This article and this example of Joan of Arc, reminded me that we need to "GET SERIOUS" about our faith, beliefs, the changes we need to make in our lives and serious about the decisions we are making on a daily basis. We are all living in a world that is morally coming apart at the seams. We need to know what we believe and value, then live it!

What a great article for the beginning of a new year. I pray that we each will take a personal inventory of our beliefs and faith, then ask ourselves if we are truly as devoted to them as we should be? 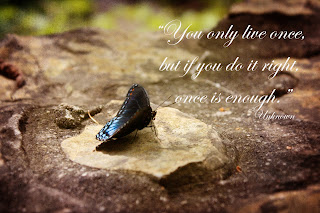