What a great story!

Just read this article today about Dave's Killer Bread. I laughed when I read it because a few months ago in Weight Watchers, I was trying to explain to the ladies what Dave's Killer Bread was and how he got started. I sure could have used this article to get more of the facts to tell them. I actually love the bread myself, the kids think there is too many nuts and seeds in there.
I read the article HERE: 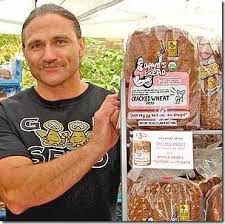 Here is his story...
In and out of jail and prison for 15 of his 49 years, Dave Dahl, a former armed robber and recovering drug addict, is a self-professed " slow learner." The creator of Dave's Killer Bread, he is also living proff that even a slow learner who seems destined for a life of crime can turn his life around.
After a solid start growing up in a family of bakers, Dahl slid into a life of alcohol, drugs, stealing, and dealing. As it turned out, he wasn't a very gifted criminal, beginning a series of in -and-out incarcerations.
It was during the last sentence that he began to see the light. " I was fortunate to suffer in prison, because I got clean, and for the first time in my life I was confident without drugs, " says Dahl, who discovered at that time that he suffered from clinical depression. He also discovered that he was smarter than he realized and a lot more interested in what life had to offer than in his next fix. He began working out and studying health and nutrition with a renewed fervor.
After his 2004 release, clean and sober, Dahl rejoined his family's baking business. His brother Glenn, owner of NatureBake ( www.naturebake.com ), the healthful-bread business started by their father in the 1950s, welcomed him back and encouraged his ideas. Within six months, Dave had designed six varieties of whole-grain, organic bread, four of which were introduced in August 2005 at the Portland Farmer's Market's " Summer Loaf " artisan bread festival to rave reviews.
At the helm of Dave's Killer Bread, Dahl now produces approximately 400,000 loaves of bread a week ( 16 varieties) with names such as " Good Seed" and "Rockin' Rye." It's sold at Costco. Dahl - who now spends a good deal of his time sharing his story of redemption with at-risk youths, business leaders, law enforcement and politicians---says he's in no hurry to grow. "We're going slow; we don't want to grow too fast," he  says.
This time, being a slwo learner has it's benefits. ~ T. Foster Jones

Love Dave's bread and Dave's story. It one of the first local products we got hooked on. His story is an awesome lesson on redemption. And his "sin dawgs" aren't so bad, either!