The Love of a pet!

My sister-in-law's cat passed away today. She had him for over 11 years. He was quiet the devoted companion to her and her girls. I personally have never enjoyed being around cats, but Tom was different. He was very calm and affectionate most of the time with me, so over the years... I have gotten less scared  of him. I have to admit  that I will miss him when I come to visit. Still, seeing him stressed out and sick so often the past few years, has been hard and I know it has been especially hard on my sister-in-law and her family!
We never had a pet when I was really little ( that I can remember ). But when we moved to 30 acre farm from the city, we automatically inherited a overweight dog named Dumplings ( how fitting ) and a blind cat. Not long after that, we had kittens and another dog ( after Dumplings passed away ), and then some steers, some Bunny's and occasionally a turtle and a few craw dads ( from the creek ). Still all of them were outside animals, so that is why it is tough for me to have an animal in the house.
The thing that helped me tolerate these in my home, is that they lived in a cage or a bowl. Still the kids got to at least have the responsibility and also experience the love of a pet.
So tonight my thoughts go out to my dear friend and sister-in-law, I know even though she knew the day was coming soon, I also know she is going to miss Tom tonight laying on her lap as she types on her computer ( like he does every time ). Hang in there Sister! 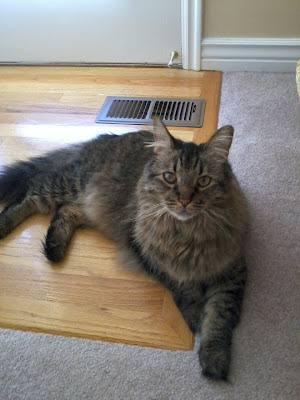 "Thousands of years ago, cats were worshipped as gods. Cats have never forgotten this."

" It's really the cat's house - we just pay the mortgage".
Author Unknown

"Cats only pretend to be domesticated if they think there's a bowl of milk in it for them."
~Robin Williams