I loved this story, honesty is always the best policy. What a great reminder that through making right choices, we can actually change our destiny! 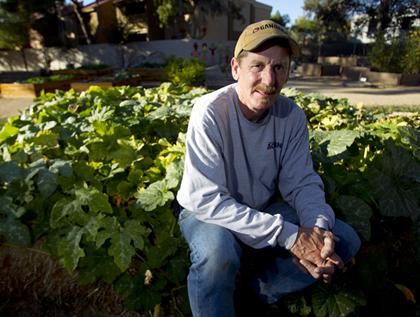 About a year ago, a homeless man in Arizona found a bag full of cash and made a fateful decision: He returned it.

The Arizona Republic published a feel-good story today that actually feels good about the future of 49-year-old Dave Tally of Tempe.

Tally was in debt, unemployed and had lost his driver's license for DUI violations. Homeless, he was sleeping on a mat in a church-based homeless shelter when he found $3,300 in a backpack at a local light-rail station.

That could have gotten Tally out of his hole, but he decided that was the wrong thing to do. Instead, he tracked down the owner of the cash, a college kid named Bryan Berlanger who had planned to use the money to buy a car to replace one he'd lost in an accident.

"Meeting Belanger and hearing the student thank and praise him for his honesty and kindness made Tally feel good about himself, he says," writes Republic reporter Dianna M. Nanez. "He hadn't had that feeling in awhile."

When word got out that Tally had turned in the cash instead of keeping it, the national media came looking for him.

Donations poured in, and Tally suddenly found himself with $10,000. But he was determined not to fritter it away.

He began paying off his bills, clearing up his driving record, and taking the long road back.

He even moved into a no-frills apartment across from the shelter as "a reminder of where I've been and where I'm not going back again."

One year later, Tally has landed his "dream job," managing a community garden.

Recently, The Republic reports, Tally started overseeing an internship program that allows people who are homeless to volunteer in the garden.

But he doesn't preach to anyone. "I let them know that when they're ready to make changes, it's possible," he says.

“Integrity is doing the right thing, even if nobody is watching.”