When my kids were little, they loved to watch the Muppets Christmas Carol. One of the their favorite sayings from the movie was "there's only one more sleep till Christmas!" So here we are now Jeff and I seeing the next generation coming up. We are beginning to now share the same movies, stories and traditions with our granddaughter Angie. It is really neat.

Today is Christmas Eve and we have a few things to get ready for tonight, so I am going to write my post now. I wanted to share one of our most memorable Christmas Eve's. It was 15 years ago and kid's loving call it The Year Mom Lit Herself Up For Christmas! 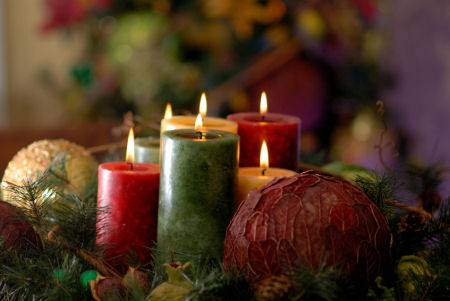 I had been to a  Christmas dinner the week before and I was so impressed with the idea they used to help teach the true meaning of Christmas, that I thought it would be a neat tradition to pass on to my family. Our kids were young, Lee was just a year old, Lauren was 3, Brad 8 and Amy 11. We had already done all our regular Christmas traditions and everyone had their jammies on, teeth brushed and prayers were said. We all gathered in the kids room and I had everyone sit in a circle and I gave each one, a candle and a plate, we turned off all the lights and I had just my candle lit. I then asked each child "what is one thing that you could do for someone this Christmas" when they shared their idea then I lit their candle with my candle. Then we would go to the next person. After we were all finished I told them to look around the room, it was no longer dark but well lit with all of our candles. The point ...if every person did one good deed for someone for Christmas ( which is sharing the Light of Christ) , then the world would be a much better and brighter place!

As we are trying to have a spiritual moment, I noticed that Brad and Lauren were fighting. I looked over and Lauren kept pulling her candle on the plate closer to her. Brad would then scold her and then push the candle further away from her. Then she would fuss at him and then pull it closer. I was frustrated because I really wanted my kids to understand how important service is at Christmas. I leaned over Brad and pulled Lauren's candle away from her, while I was doing that I told Brad, "She just doesn't know how dangerous fire is". I had no more said that, then Brad yelled  " Mom, your sweaters on fire", sure enough when I leaned over Brad's candle to push Lauren's away, I caught myself on fire.

I always wondered how I would react if something dangerous or tragic happened? I just sat there and in seconds my whole sweater was on fire, all I can remember was... Amy yelling " Stop, Drop and Roll" over and over. Brad ran out of the room screaming, Lauren just bawled and I just sat there stunned. Finally Jeff ran over and started beating on me saying "I've got you Lynn". He continued to beat me until the fire was all out. We then said a silent prayer that things didn't get any worse and tried to put the kids to bed. The sad part was instead of having visions of sugar plums dancing in their heads....all they could think about was the fire department! They kept saying " Mommy, do we have to do that tradition again next year?" "We don't want to lit candles any more!"  "Why didn't we call 911?" "Will you catch yourself on fire again"

They were so upset and crying that we like to never got them to sleep. When I finally got them settled and came downstairs with Jeff... he was laughing so hard. I don't think I have ever seen him laugh like that.  When he finally could compose himself, all he said was... "Only you Lynn, could take such a spiritual idea and turn it into a child's nightmare!"

So needless to say it was a great idea, but maybe not the best one for a family of little children! It actually was quite a few years before the kids would even let me buy a candle. :) Now it is one of their favorite funny Christmas memories.

But in my defense... it was a great idea and not a bad suggestion for all of us to realize just by touching one person's life in a positive way, we would make the world a better and brighter place. So hopefully each one of us will try this Christmas and this new year... to share the light of Christ with someone else by our service and kindness to them. Have a wonderful Christmas Eve! Good night dear friends!