The Example of a Child

Lynn is out enjoying a family reunion for the next few days, so she has asked me (Krystal, her daughter-in-law) to fill in while she is away. She is always so good at finding such inspirational quotes and stories, I hope I can come up with something you will like for the next few days. Please bear with me.
As many of you know, Brad and I have a little boy named Kai. Kai is a sweetheart, but the older, and more mobile he gets, the more he turns into a wiggly, energetic little guy. Going anywhere that we have to sit still for more than 10 minutes is such a struggle...especially church. There have been so many Sundays that I have seriously wondered why we even bother coming. I don't hear the lessons, we spends half of the time in the hall chasing Kai, and I spend all of the time frustrated. Why do we put ourselves through this madness?
A couple of weeks ago at church, as I was trying to coerce Kai into sitting still by bribing him with pretzels and milk, Kai all of sudden stopped what he was doing, sat down, and folded his arms. I looked up to see that the closing prayer was being said. I was shocked. I had no clue he was even paying attention! I wasn't even paying attention! In that moment, Kai taught me more about parenting than any book I have read or article I have studied.
I am sure many of you are already through this stage in your life, and could have told me this lesson ages ago, but seeing my 15-month-old son know that it was time to pray, and fold his arms in reverence hit me like a ton of bricks. He learns by example (and thankfully there are so many other examples than my own to help teach him), and he teaches me by example.
I'm grateful to have the opportunity to muddle through this whole parenting thing with Brad, and that I have such an awesome, if not rambunctious, little guy to teach me what life is all about. 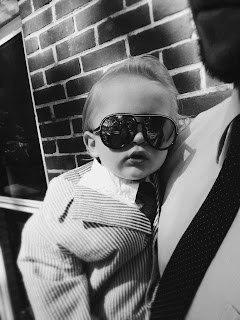 "Parents must lead by example. Don't use the cliche; do as I say and not as I do. We are our children's first and most important role models." Lee Haney

"I think that the only way to teach is by example, as children will more easily follow what they see you do than what you tell them to do." Gloria Estefan

"If you as parents cut corners, your children will too. If you lie, they will too. If you spend all your money on yourselves and tithe no portion of it for charities, colleges, churches, synagogues, and civic causes, your children won't either. And if parents snicker at racial and gender jokes, another generation will pass on the poison adults still have not had the courage to snuff out." Marian Wright Edelman

"Learning is a result of listening, which in turn leads to even better listening and attentiveness to the other person. In other words, to learn from the child, we must have empathy, and empathy grows as we learn." Alice Miller

Yep, our kids amaze us. Sounds like Kai is going to do ok. He already knows the importance of prayer. Good boy!