What an incredible story!

During WWII, Irena got permission to work in the Warsaw ghetto, as a Plumbing/Sewer specialist.

She had an anterior motive'.

She KNEW what the Nazi's plans were for the Jews (she, being German).

Irena smuggled infants out in the bottom of the tool box she carried, and she carried, in the back of her truck, a burlap sack (for larger kids).

She also had a dog in the back that she trained to bark when the Nazi soldiers let her in and out of the ghetto.

The soldiers, of course, wanted nothing to do with the dog, and the barking covered the kids/infants noises.

During her time of doing this, she managed to smuggle out, and save, 2500 kids/infants.

She was caught, and the Nazi's broke both her legs, both her arms, and beat her severely.

Irena kept a record of the names of all the kids she smuggled out, and kept them in a glass jar buried under a tree in her back yard.   After the war, she tried to locate any parents that may have survived the horror, and reunited the family.

Most had been gassed. Those kids she helped got placed into foster family homes or adopted. 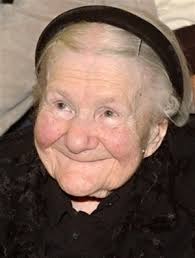 Irena Sendler was an elderly, relatively unknown Polish social worker until four teenagers from Kansas in search of a National History Day project discovered what she had done. Sendler had helped to rescue 2,500 Jewish children from the Warsaw Ghetto during World War II, before being captured and sentenced to die. But she escaped and lived quietly until the students found her and wrote a play about her. Sendler died on May 12, 2008, aged 98 years.

"There's no excuse for the young people not knowing who the heroes and heroines are or were."  ~ Nina Simon


" A hero is an ordinary individual who finds the strength to persevere and endure in spite of overwhelming obstacles."  ~ Christopher Reeve

" A hero is someone who has given his or her life to something bigger than oneself." ~ Joseph Campbell