Things aren't always as they seem!

We don't watch TV that often anymore. I know that seems weird in today's society, but the truth is...we like it this way. It doesn't mean it never comes on, there are exceptions to the rules, like on Saturday if Jeff and Lee want to watch a Football, Basketball or Baseball game, but that is about it.
One of the reason that we turned off our TV was because of all the negativity it had on it. Another big factor that lead to that decision was...the amount of filth that was coming into our home through the TV. I saw a commercial a few years ago where it made a piece of gum act like a person,and then do a strip tease with the jingle of the commercial. I was thinking "wow, what a sad world we live in, where everything ( almost everything ) is sexual or made to at least look that way.
I am very big on protecting my home, this should be one place we feel safe and happy. By turning off the TV, we are keeping a lot of that junk out of our home, and that feels good. It really has made a difference. I am sure by now you are wondering what this has to do with my Christmas story? Well, it is a funny story tonight but it is so true. We tend judge things a certain way, when in the end... they are really not like that at all. Much like the news, it seems like all it is reporting is murders, theft, infidelity or drugs. Yet, I know that isn't true, but because we hear it day in and day out, we begin to believe it. There are a lot of wonderful stories out there, a lot of wonderful people out there making real contributions in the world, but we just don't hear about them that often. Wonder why kindness doesn't sell? It really should.
Anyway, enjoy this cute story and remember...things aren't always as they seem! 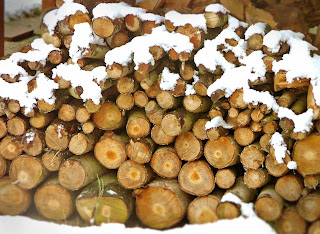 How They Forecast a Cold Winter

One day in early September the chief of a Native American tribe was asked by his tribal elders if the winter of 2009/10 was going to be cold or mild.  The chief asked his medicine man, but he too had lost touch with the reading signs from the natural world around the Great Lakes.

In truth, neither of them had idea about how to predict the coming winter.  However, the chief decided to take a modern approach, and the chief rang the National Weather Service in Gaylord Michigan.

'Yes, it is going to be a cold winter,' the meteorological officer told the chief.  Consequently, he went back to his tribe and told the men to collect plenty of firewood.

A fortnight later the chief called the Weather Service and asked for an update. 'Are you still forecasting a cold winter?' he asked.

As a result of this brief conversation the chief went back to the tribe and told his people to collect every bit of wood they could find.

A month later the chief called the National Weather Service once more and asked about the coming winter. 'Yes,' he was told, 'it is going to be one of the coldest winters ever.'

'How can you be so sure?' the chief asked.

The weatherman replied: 'Because the Native Americans of the Great Lakes are collecting wood like crazy.'