Well, I won't talk much at all tonight. We just got back from the E.R. at the hospital. Our youngest son Lee, got injured in a basketball game. Some kid landed on his neck. Long story short, he is ok but sprained the ligaments in his neck pretty bad. I am so tired, I think that is how they explained it? Any way, it has been a long night already, I hope . Emergency rooms are the worst. Shoot my neck is hurting after sitting in those chairs for hours. Need to head to bed. Enjoy your story! 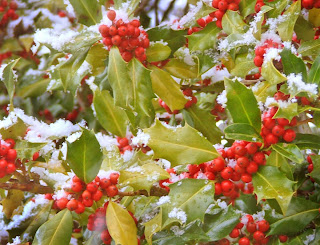 The Story of Holly and Ivy

The Story of Holly and Ivy is a 1958 children's book written by Rumer Godden and illustrated by  Barbara Cooney.

The orphanage outside of Mill Valley has closed up for Christmas, and the children have all been dispatched to various homes for the holiday. Only one child, Ivy, is overlooked. The head of the home cannot take Ivy home with her, so she decides to send her to an infants' orphanage some distance away. Ivy suggests that she could instead go to her "grandma's house", the only problem being that she has no grandmother.

The train that Ivy is placed on passes through the town of Mill Valley. While the train is stopped, Ivy happens to peer out the window, and notices that (due to a malfunction of some sort), the illuminated welcome sign no longer reads MILL VALLEY but instead reads I V Y. She takes this to indicate that she really does have a grandma, and that she lives in that town. She leaves the train, and it departs without her.

Meanwhile, a beautiful new Christmas doll named Holly is standing in the display window of Mr. Blossom's toy store, wishing for a little girl to come and take her home. The toy owl next to her, Abracadabra, treats her with undisguised contempt, and suggests that since no one will want Holly after the holiday, she will wind up spending the year in the back room with him.

After a very hectic afternoon, Mr. Blossom's toy store finally closes. Neither Holly nor Abracadabra has been sold. Mr. Blossom is tired from a long day's work, so he asks Peter to lock up the store for him. He also tells Peter that he can pick a toy for himself, as a bonus. Peter locks up the store, but he has a hole in his pocket, and the key to the store slips out of it without him noticing, landing in the snow outside the shop.

Meanwhile, Ivy's search for her "grandma" has not gone well. Feeling very discouraged, she is walking past the toy store when Holly catches her eye. The doll is exactly what she wanted, but she is outside, and the store is locked. She happens to find the key that Peter dropped, and decides to keep it. Night falls, and she takes shelter in a nearby alley.

The next morning, she returns to the toy store to look at Holly, and overhears a conversation between Peter and Officer Jones, who has been on patrol all night. Peter is distraught about losing the key to the shop. Ivy realizes that was the key that she found, and returns it. Peter goes in to check on the store. Officer Jones quickly realizes that Ivy is on her own, and decides to take her home for breakfast.

Back in the store, Peter ensures that the store has not been robbed. Since little Ivy saved his job, he decides to use his bonus to select a present for her, and chooses Holly. Abracadabra, furious that Holly's wish is about to come true, hurls himself at Peter and winds up in the trash. When Mr. Blossom goes to retrieve him later, he has mysteriously vanished.

At the Jones's house, Ivy realizes that they have a beautiful Christmas tree and no children, which means that she has found her grandma. Shortly after, Peter arrives and delivers a beautifully wrapped box, which of course contains Holly. Everyone's wishes have come true: Ivy has a family and a Christmas doll. Holly has a little girl to hug and squeeze and love her. And when they adopt Ivy, the Joneses have the child they always wished for.

"Christmas, my child, is love in action. Every time we love, every time we give, it's Christmas!"  ~ Dale Evans Rogers