More than just a fruit cake!

For Christmas this year, a dear friend of ours gave us a loaf of her Mom and Grandmother's Favorite Spice bread! It looked like fruit bread and I think it did have some fruit in it, but it was wonderful. She told us the story of her first Christmas married, poor and away from home...how her Mom sent her this bread and that she cried when she opened it. I was honored that she shared it with us.
I thought of her when I read this Christmas story, we all need to have traditions that we pass on to each generations, it makes Christmas more special that way! Hope you enjoy it! 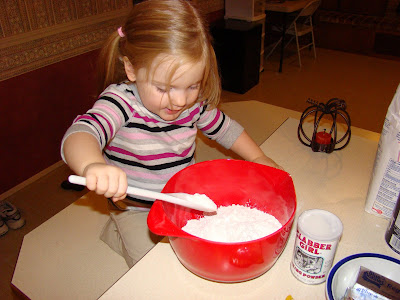 I never cared for the taste of fruitcake, but I’ve been saving one for years.
It’s the last of those I used to get every Christmas from Elizabeth, my friend Paul’s mom. She always cooked up what seemed like hundreds for family and friends, wrapping them in plastic, and tying them with red and green ribbons.
Fruitcakes are known to take on lives of their own, passing from one person to the next, sometimes lingering long enough to carbon-date. Cut one open, if you dare, and divine its age like you’d count the rings of some ancient tree.
Though we pretended to like them, Elizabeth never pressed us for reports on their flavor, probably sensing that many simply became souvenirs—if not albatrosses—not that it seemed to matter. Still, everybody got one, delivered with a proud smile and wrapped in love, a present from this woman who used her recipes to nourish our souls as much as our bodies.
The tradition was passed down by Elizabeth’s mom, who had learned it from her own aunt. With nobody sure how many generations back it goes, I wouldn’t be surprised to learn an early version of the recipe, scripted on papyrus and stored in an urn, has been unearthed during some distant archaeological dig.
Paul’s father lost his hearing some years back, and got to where he couldn’t see very well. Then Elizabeth’s diabetes eventually put her in a wheelchair and robbed her of sight, so Paul moved back home that fall to help care for them.
As Christmas approached, Elizabeth kept mentioning how much she wished she could hand out those fruitcakes again. Saddened by having to break the tradition, she reminisced about helping Grandma when she was a little girl. Tears welled in her eyes as she talked about her fruitcakes, admitting that eating them isn’t what matters, that it’s cooking up some love and sharing it with people who mean the most to her.
During her nap that afternoon, Paul searched through two boxes stuffed with hundreds of recipes filed in no particular order. He finally found it, flour-crusted, yellow with age, and difficult to read. He went out and bought the ingredients, then set about mixing, determined to make her a batch to give away. Paul’s not known for his culinary finesse, and most family recipes require a dollop of magic beyond what’s actually written down, so he finally had to wake her, confessing his plan and asking her to help.
They spent the rest of the afternoon making fruitcakes. She took charge, while Paul served as her eyes and hands. They didn’t need that old recipe card; Elizabeth knew this one by heart.
She glowed with pride as she handed them out, accepting kisses and thanks, hugging back with newfound strength despite her frail condition. She’d probably felt that way every year, but this marked the first time we really noticed.
Several days after Christmas, Elizabeth required hospitalization, but there was little that could be done, and she took a turn for the worse. In a stark, antiseptic room far from the familiar aromas of her kitchen, Paul lost his mother, and we all lost a friend.
Gathered at the house after the funeral, Paul and his siblings carefully copied her fruitcake recipe, all vowing to carry on the custom. Several of them did, too—for a couple of years. Busy with their own lives and still discovering their own unique ways to celebrate, they gradually let the fruitcake tradition slip away.
Some things will never leave us, though. Elizabeth’s children, like all of us she touched, will always carry on with a more important tradition: living the way she taught. Devotion to our families, integrity, loyalty, and love for each other . . . these are what I see being passed on to the next generation. These are truly Elizabeth’s recipe for life.
I still have that fruitcake somewhere, the one she and my friend made together. When I look at it, I can see her face lighting up as she presented it to me.
It is, after all, just a fruitcake. I still don’t care for the taste. And I can’t say how long I’ll manage to hang on to this odd thing, a souvenir wrapped in plastic and tied with red and green ribbons . . .
A family recipe, the reminder of those last precious moments my friend spent with his mom, a Christmas gift from the heart.

"Christmas is doing a little something extra for someone."   - Charles Schulz

"Two things upon this changing earth can neither change nor end; the splendor of Christ's humble birth, the love of friend for friend."    - Author Unknown