When my kids were teenagers there were a few times ( ok quite often ) that they got grounded. That seem to help them come to the conclusion quicker that…family rules were to be honored and kept. It also reminded them that they might have the ability to choose, but they can’t choose the consequences of their actions. That was a hard lesson some times to learn. Sometimes it is even hard to understand or handle those types of lessons, even when you are an adult.  Also, some of our kids were dare devils with a huge sense of adventure and others were not. Some were when they were little, and then it changed as they got older and some were just the opposite. So each time I felt like I had finally got through with one lesson, drama, concern…it seemed like one of the other kids would have a problem. I remember having my share of worry as I tried to figure it out as a parent. Parenting is much harder than it looks!
One thing that I struggle with is adventure, danger, thrill seeking. I am just not that type of person, and  I’m getting much more cautious as I get older…that probably isn’t a good thing. The kids tease me as times, when I warn them about this or that, and they just say “ Mom, you don’t have to go to the worst case scenario do you?”  Ok, I am a little different than a lot of people, but still being cautious maybe isn’t all that bad. However it is difficult because I am married to a man who loves adventure and many times, because of my physical limitations I can’t go do them with him. Gratefully we have had children who love many of the same things as their Dad, and he loves being and going places with them.

A few weeks ago, Lee and a few friends went to take a hike up in the mountains. He gave me all the information where they would be… but I didn’t know the trial or the area, since I hadn’t hiked it. But Jeff had and he said when you get to the top you will love it, it is breathtaking.

Ok, speaking of breaths, you might want to take a deep breath before  you scroll down and look at this photo of Lee, that they took of him when he reached the top! Lee put it on a the screen saver, so it was big. That was the first time I saw it and my first two reactions were…Why would you even climb us something that high?  And you are so grounded from ever taking trips like that again!

Remember these were my thoughts!
Then when Jeff saw it, I thought for sure he might reprimand Lee, but his response ( out loud ) was… “that is incredible Lee, that must have been a rush to have climbed up there, what a gorgeous view!”

Guess we are safe to say that Mothers and Fathers are different  and even among our own, there are probably some of you Mother’s out there that think this would be a neat place to go your self or to take your kids too! I will just try to remember to smile and be grateful that he didn’t FALL OFF that mountain, and that he was able to experience the beauty of the great Northwest!  Still, I am sooooooooooo glad I didn’t know he would be doing something like this. Maybe that is why they say “sometimes it is just better if Mom doesn’t know? “  Wonder it they were talking about these kind of experiences?

So to  all you Mothers, just remember to really support  your kids, but also know exactly where they are going and what they are going to do…that might help your decisions. But at the same time, I am so glad that my kids are more like Jeff and not me. I am soooooooooooooooo boring, and I just love keeping my feet on the ground.

“Life is uncharted territory. It reveals its story one moment at a time.”  ~ Leo F. Buscaglia

“Man cannot discover new oceans unless he has the courage to lose sight of the shore.”  ~ Andre Gide

“People travel to wonder at the height of the mountains, at the huge waves of the seas, at the long course of the rivers, at the vast compass of the ocean, at the circular motion of the stars, and yet they pass by themselves without wondering.”   ~St. Augustine, Early Christian Priest 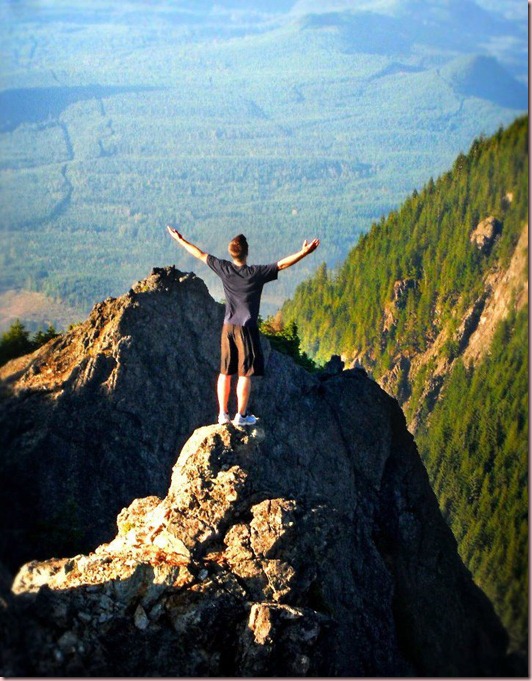