Life keeps happening...even on your Anniversary!

"LIFE IS TEN PERCENT WHAT HAPPENS TO YOU AND NINETY PERCENT HOW YOU RESPOND TO IT "
I have heard this saying many times in my life and I believe it is true!
Today started out fine, I got a few things done around the house, then headed off to my Physical Therapist in hopes that he could give me some relief from my back pain lately. The appointment was in Bellevue. After that appointment...I was suppose to meet a friend and then on the way home I was going to stop and get a card and stuff to make a special dinner for Jeff tonight. After all , it is our 34th wedding anniversary!!!
But as I was heading to the appointment, only blocks away from the PT's office, as I was turning on the green light, someone coming the other way ran through the red light and hit me. I kept thinking as I saw him come closer ...that he is going to stop, but then when I put on my brakes, I realized that there is no way he wasn't going to hit me and he did. After we got to the side of the road and I called 911 and the insurance, I was still shaking. My neck hurt, my knee hit the dash board and my lower back was hurting. I first thought ...what are the chances that I would get hit ...on my way to the PT for back pain in the first place? Then I thought...am I going to have neck and back pain for my whole life? From then on the thoughts were getting worse and coming faster.
After all the calls and exchanging of numbers and insurance cards...I headed back to the PT office and told him what happened, he worked on my back and neck.
It was after the appointment when I was sitting in my car for awhile (because I still felt light headed and a headache was coming on)...that I thought...I am very lucky that I was able to see my PT right after something like that happened. I was blessed that it wasn't worse. I was grateful that the man did stop, admit he ran the red light; and that he had car insurance.
So even though I have a headache and a pretty bad neck and back ache, I realized that I am blessed. It could have been way worse.
Jeff and I will have to celebrate our anniversary later, but I just came home and laid down and have been keeping ice on my neck and back.
Though I am blessed to have had 34 years with Jeff by my side. Have they all been blissful and wonderful...nope, but we have continued to work at it and he still is my best friend and the love of my life! We truly have had many wonderful years!
I just need to remember this quote again today, life is still good and we have much to be thankful for.
Good Night dear friends!
P.S. I have posted this article before, but I feel like it is worth reading again! 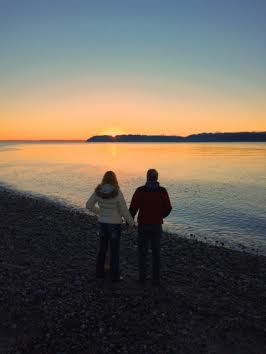 A LOVE LIKE THAT
I was 23, and all the way to the hospital I'd been composing what I would say to Mama before they took her to cut into her heart, whose center I supposed myself to be; hadn't she told me all my life I was the most important thing in the world to her?
Threading my way through the hospital corridors, I practiced my opening line, which  had to strike just the right note. Who but I could give her strength and confidence she would need? Whose face but mine would she want to be the last one she saw before they cut her open and died probably? Whose kiss but mine...?
I turned a corner and there was my mother lying on a stretcher in the hall, waiting for them to come for her. My father was standing over her. Something about the two of them made me stop and then, as I watched, made me keep my distance, as if there were a wall between us, and around them.
It was clear to me at that moment that for them, nothing existed outside them, nothing; there was only the man, the woman. She didn't see me, nor from the looks of it care much whether she did. They weren't talking. He was holding her hand. She was smiling into his eyes; and they were, I swear, speaking a language that at 23 I hadn't begun to understand, much less speak myself. But I could see them do it, literally see them, and I moved closer to see more, stunned, fascinated, very jealous that I had fallen in love with someone, married him, divorced him and never once come close to what I was looking at in that hall.
Next time, I said, I will know better. I will love like that.   ~ Linda Ellerbee 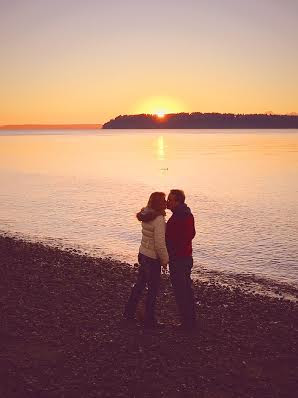